At ISE, la Vitre Can “Teleport” People Anywhere in the World! 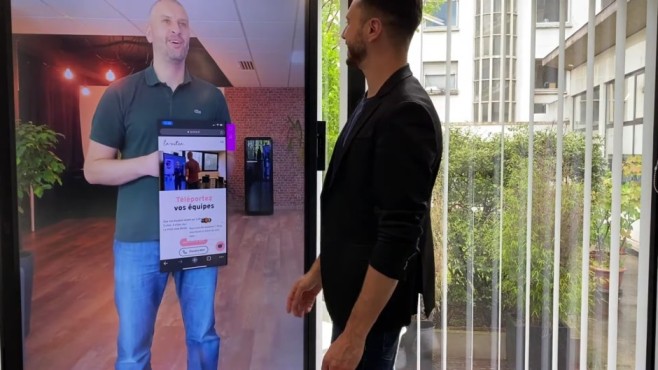 At ISE, la Vitre Can “Teleport” People Anywhere in the World!.

la Vitre is the first human-size digital window that connects people as if they were physically together, whatever the distance or language.

Following its success at CES last January, la Vitre returns to showcase its teleportation solution at ISE in Barcelona, Spain, from May 10 to 13. The concept is simple: a standalone digital window that allows physical spaces and people to connect instantly, such that they forget it’s even there. The human-sized touchscreen can be installed within an hour and turns on with a simple knock. People can talk in any language thanks to the embedded translation feature, share pictures, and videos, and interact with one another in full-feet and full-sized. Thus, whether they are on different floors, sites, cities, or countries, teams can finally meet as if they were literally face-to-face! Teleportation becomes possible with la Vitre.

The concept was initially developed by UCAYA, a digital agency whose clients include Canal+, FranceTV, and Microsoft. UCAYA was looking for a way to streamline communication between theirs teams its various sites. Given the success, Romuald Boulanger, Anthony Vannier and Thierry Bouquain, the co-founders, decided to launch la Vitre in February 2019. The start-up has fully developed the solution, which includes the software, the selection of compatible touch screens, speaker, microphone and camera for their performance and works with SIDEV for distribution.

la Vitre brings a richer, more human dimension to remote interaction. The human-sized touchscreen features powerful speakers, a camera, and a microphone. It requires no additional accessories and is activated with a simple knock. It is thus as easy and intuitive to install as it is to use!

Our ambition was to make technology seem invisible, by giving the user the feeling that they are in front of a real person instead of a screen. Easy to install and to use, la Vitre is an intuitive solution particularly effective for teamwork. Indeed, working methods have evolved and large companies such as Natixis or Capgemini now extend on several buildings, sites and countries, making fluent communication difficult, to say the least. We wanted to provide a solution to see each other and discuss wherever they are, no matter the location or the language

According to Romuald Boulanger, CEO and co-founder of la Vitre

A meeting as natural as an exchange in the real world:

The solution has been designed to provide the most immersive experience possible: sound and video quality, elimination of external noise pollution, everything was aimed at making discussions more fluid. The technology developed by la Vitre also makes the most of touch screens, which become interfaces for sharing and collaboration. Thus, technology is easily forgotten to encourage the best of human interaction.

How does it work?

A standalone tool requiring minimum assembly, la Vitre’s setup takes less than one hour on a dedicated tailormade frame that reduces its weight by half. The result? A sleek, discreet window to any distant time or place, in any language. To speak with a colleague, the user simply taps on the touchscreen as if they were knocking on the door of a neighboring office. The colleague can hear the knock and must simply move closer to la Vitre to open the discussion. While permanently opened to another space, la Vitre can be blurred for privacy reasons.

la Vitre can be easily used for briefings, coffee breaks, one-to-one meetings, or even to connect strategic points at a production site… More than a window, la Vitre functions as a ‘real’, open door between two distant places. la Vitre aims to save time, allowing for short interactions in person rather than long-winded email conversations which can add to the confusion.

• Content and documents can be shared instantly from any computer, phone, or tablet.
• Users can comment on live data, graphs, photos, etc., and can leave comments on the touchscreen (and rework them with apps).
• Moreover, 60+ languages are available and automatically translated on the screen.

la Vitre can also be used for:
• Events to teleport the speakers on stage
• Welcoming visitors to manage several entrances simultaneously
• Retail to create a corner shop
• Training to increase audience numbers
• Digital health for surgical planification or training

la Vitre is already used by more than thirty companies, including Natixis, Accenture, Kering, Bouygues Construction, Capgemini, Enedis, Corbion, Engie, and others. There are more than 200 active windows worldwide. New windows installed at prestigious partners will soon be announced.

Availability
la Vitre is available in leasing, integrating the software, the Kit la Vitre, and the complete hardware for an 86” experience.