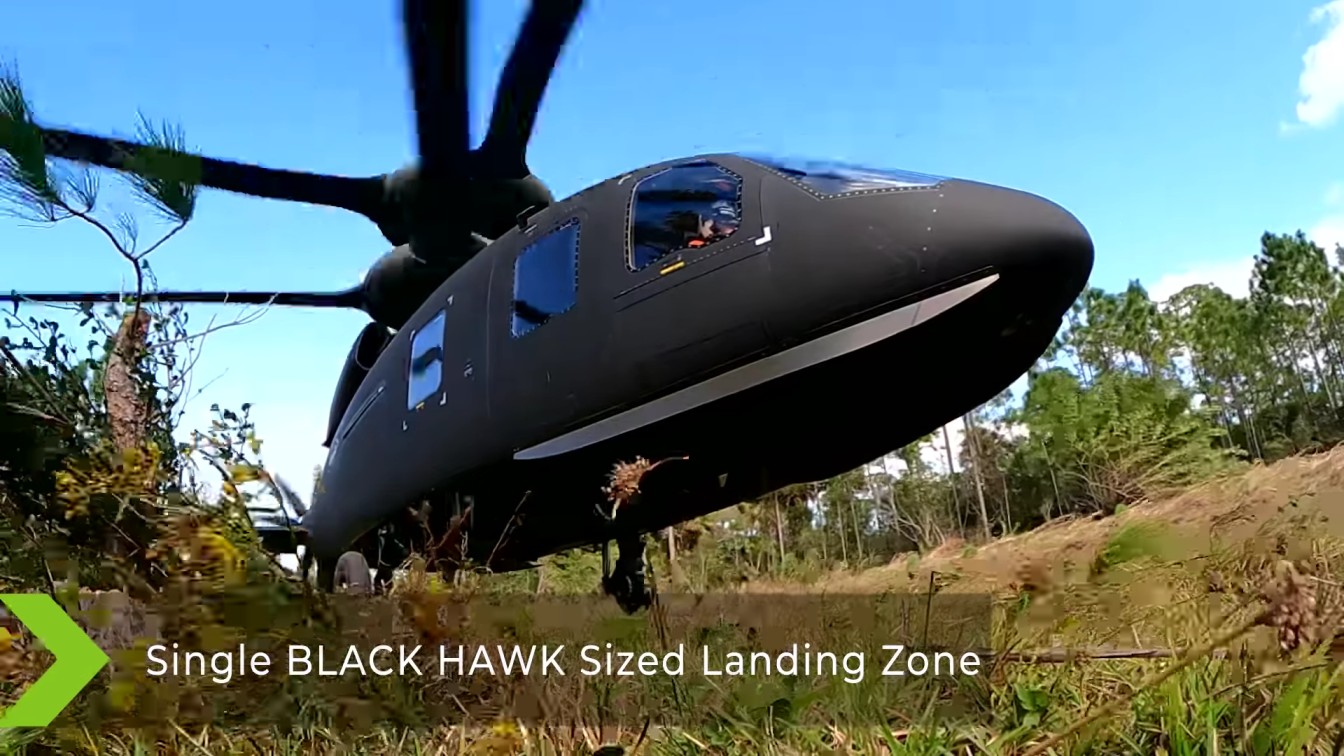 Assault aircraft, such as the Future Long-Range Assault Aircraft (FLRAA) of the United States Army, fly low and fast, land quickly, transport Soldiers to the X, and get out – all while avoiding the enemy in difficult terrain. Team DEFIANT is a collaboration between Sikorsky, a Lockheed Martin company, and Boeing to develop an agile, maneuverable weapon system that flies twice as far and twice as quickly as the BLACK HAWK while maintaining the same operational footprint. DEFIANT X will alter the way the Army responds to threats in 2035 and beyond, thanks to Team DEFIANT’s unrivaled competence in mission systems, training, and sustainment. DEFIANT X is the finest answer for the Army’s mission today, as well as the only one capable of adapting to future threats.

“We fully demonstrated DEFIANT’s ability to execute the FLRAA mission profile by flying 236 knots in level flight, then reducing thrust on the propulsor to rapidly decelerate as we approached the confined, and unimproved, landing zone,” said Bill Fell, DEFIANT chief flight test pilot at Sikorsky and a retired U.S. Army Master aviator. “This type of level body deceleration allowed us to maintain situational awareness and view the landing zone throughout the approach and landing without the typical nose-up helicopter deceleration. This confined area was extremely tight, requiring us to delay descent until nearly over the landing spot, followed by a near-vertical drop. We landed DEFIANT precisely on the objective with little effort as we descended into this narrow hole while maintaining clearance on all sides.”

SB>1 DEFIANT is a technology demonstrator for the DEFIANT X® weapon system, which the Sikorsky-Boeing team is submitting for the US Army’s FLRAA competition as part of the Army’s Future Vertical Lift program. DEFIANT X will allow crews to fly low and fast across difficult terrain, which is where most Army aviators spend their time. It will enhance Army Aviation’s capabilities on the modern battlefield while fitting into the same footprint of a BLACK HAWK®. The US Army will be able to carry troops and supplies in future battles at twice the range of the current fleet with DEFIANT X.

“It’s what we call building combat power rapidly, and aircraft like the DEFIANT X can do that,” said Tony Crutchfield, retired U.S. Army Lieutenant General and now vice president of Army Systems at Boeing. “In the Pacific, it’s even more important because your lines of operation are going to be dispersed over a wide area; you’re going to have these small bases and supply lines that’ll be positioned either on ships or on islands. You’re going to want to move more assets, maneuver in confined terrain and survive to build that combat power faster than your adversary can – so you can win.”

This vital skill gives pilots more agility and survivability in high-threat situations, letting them breach opposing defenses while lowering hostile fire exposure. The X2 coaxial rotor system and pusher prop on the DEFIANT X allow for a high degree of mobility in and around the target, which is also linked to survival.

In future Joint All-Domain Operations (JADO) situations, X2 speed paired with next-generation flight control maneuverability will be dominant. X2TM Technology is a breakthrough flight-control concept that allows for genuinely transformational deceleration and acceleration. In the most demanding tactical operations, the X2-rotor design will provide exceptional flight stability, safety, and certainty. DEFIANT X will be equipped with a tried-and-true optionally-piloted flight control system that will allow for more reliable and safer operations in low-altitude, obstacle-rich settings, or in degraded, unpredictable conditions. DEFIANT X is ready for the future battlefield, providing speed where it counts.

DEFIANT X will transform the way the Army fights by allowing crews to fly low and quickly in complicated terrain, which is where Army aviators spend the majority of their time. DEFIANT X features Sikorsky X2TM Technology, which allows it to fly at high speeds while maintaining low-speed handling characteristics. In high-threat air defense scenarios, this vital feature gives pilots more agility and survivability, allowing them to breach opposing defenses while lowering enemy fire exposure. The DEFIANT X’s pusher prop and compound co-axial rotor system allow for a high degree of agility in and around the target, which is directly linked to survival. DEFIANT X is the difference between getting there and completing the mission.

Sikorsky and Boeing have developed more than 90% of the current military rotorcraft for the United States Army and have logged more than 15 million flying hours together. We’re the team behind legendary military helicopters like the BLACK HAWK, Chinook, and Apache, and we’re in the best position to ensure interoperability with the long-term fleet. DEFIANT X will rely on an established, low-risk manufacturing capacity, which will be supplemented by a proven digital thread and sophisticated manufacturing techniques already in use on the BLACK HAWK, Combat Rescue Helicopter, and CH-53K. The DEFIANT X team is the finest team to offer a holistic weapons system to the Army because of Sikorsky and Boeing’s combined resources and experience in JADO capabilities.

Throughout the conception, development, manufacture, and maintenance of DEFIANT X, the digital thread will be present. DEFIANT X will be part of a connected logistical network that uses condition-based maintenance data analytics to provide maintenance-free running periods, improve interoperability and sustainment, and cut overall costs. It’s either reconstructing infrastructure or introducing the world’s most advanced vertical lift weapon system in a seamless manner.

The DEFIANT X design’s transformational qualities of speed, range, and convergence provide the ground maneuver commander with next-generation capabilities. DEFIANT X can land information, massing combat force in support of the ground tactical strategy, because it has the same operational size point as a BLACK HAWK. The proven crashworthy, survivable seating layout of DEFIANT X will be recognizable to soldiers who have trained and deployed with BLACK HAWKS. DEFIANT X will also benefit maintainers because it will make use of the current US Army aviation support infrastructure.