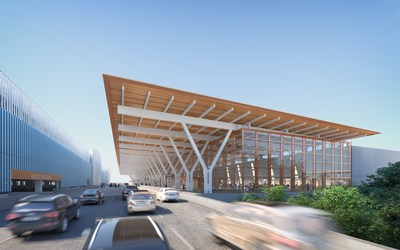 MALVERN, Pa., Dec. 23, 2021 – The Aviation Department plans to employ this technology to increase the range of its electric buses without having to establish an intrusive above-ground charging infrastructure or take vehicles out of service for charging. Momentum Dynamics, based in Pennsylvania, will offer the charging technology, which will be installed in time for the New Terminal’s opening in early 2023.

“We are designing and building a modern New Terminal and we want to make sure that its support infrastructure does not detract from the design,” said Fleet Manager Kenneth Williams. “Inductive charging was not only an efficient solution in terms of monetary outlay and ongoing costs but was the only system we found that can deliver energy without the traditional plug-in infrastructure.”

KCI Airport has long been at the forefront of environmental advancements. The Kansas City Aviation Department was an early adopter of compressed natural gas technology when it added CNG vehicles to its shuttle bus fleet, complete with a fueling station, in the mid-1990s. When the Aviation Department introduced four BYD buses to its fleet in 2017, it became the first airport operator in the United States to use fully electric buses, and it plans to add three more in 2020.

The inductive system, shown below, will offer frequent incremental charging to the existing KCI Economy Parking electric shuttle buses, allowing them to stay in service for the entire seven-mile loop without having to return to the garage for a charge. Two 300 kilowatt (kW) wireless inductive chargers will support the system at shuttle bus stations outside baggage claim in the New Terminal. The electric buses will park over the inductive charging pads and will automatically charge while parked over the in-ground pads while waiting for passengers.

With this wireless system, the charging is fully automatic and requires very little interaction by the driver. Charging takes place while the passengers are loading and unloading; each charging session automatically ends when the bus departs from the pad. At night, the vehicles have the option of charging away from public view at the bus operations facility, but this is usually unnecessary with on-route wireless charging as the bus batteries remain nearly fully charged throughout the day.   It is anticipated that these two chargers will support the entire KCI parking fleet of approximately 28 vehicles keeping them in continuous operations at peak demand periods. It removes the need to have a dedicated charger for each bus.

Initially, four existing BYD K7 30-foot electric buses will be retrofitted with the Momentum wireless system enabling automatic charging of the vehicles’ batteries. The inductive charging system is designed to work in all weather conditions.

“We are proud to be a part of the new KCI terminal project, which thanks to the visionary approach of the KCI leadership team, will enhance the beautiful terminal’s electric vehicle operations by providing invisible, automatic charging without disrupting passengers or drivers,” said Andy Daga, CEO and founder of Momentum Dynamics, a global leader in high-power inductive charging.  “We are seeing demand around airports on the passenger side for taxis, hotel shuttles, parking operations, as well as on the air operations side for ground support equipment including tugs, carts, food service, fuel, snow clearing, and maintenance equipment.”

Momentum Dynamics, based in Malvern, Pennsylvania, is the world’s leading provider of high-power inductive charging for all types of electric vehicles, including cars, buses, delivery trucks, and heavy trucks. The organization is known for its outstanding successes and unique skills of its engineers and scientists, who practice world-class technology innovation through modular design. Mechanical Engineering Magazine awarded Momentum the 2019 Emerging Technology Award. For more information on Momentum, go to www.momentumdynamics.com or LinkedIn.

The Kansas City Airport System is an Enterprise Fund Department of the City of Kansas City, Mo., and is supported wholly by airport user charges. No general fund tax revenues are used for the administration, promotion, operation, or maintenance of the airports in the system. Visit FlyKCI.com for more information. New Terminal information is at BuildKCI.com. Find us on Twitter, Facebook, Instagram and LinkedIn.