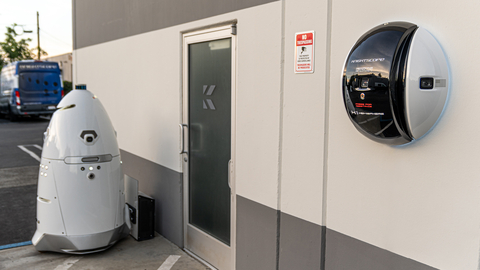 The Hemisphere includes the majority of capabilities Knightscope many clients already enjoy today with its existing suite of technologies, but in a much more compact size and affordable subscription price. It has three cameras providing 180-degree, eye-level, high-definition video; a strobe light; automatic license plate recognition; facial recognition; automated broadcast announcements; and intercom capability, all running fully encrypted on a 4G or 5G wireless network.

The K1 Hemisphere is a perfect entry point into deploying Knightscope’s advanced technologies for commercial property owners, residential, bank ATM vestibules, truck stops, lobbies, loading docks, ports, rail, schools, and any other places where the security and safety profile of the places you work, live, study and visit may be enhanced.

The introductory price will be $0.75 per hour on an annual contract. The optional Knightscope+ remote monitoring services may be added for an extra $2 per hour. Knightscope has targeted to begin shipping later this year.

Knightscope is an advanced security technology company based in Silicon Valley that builds fully autonomous security robots that deter, detect and report.