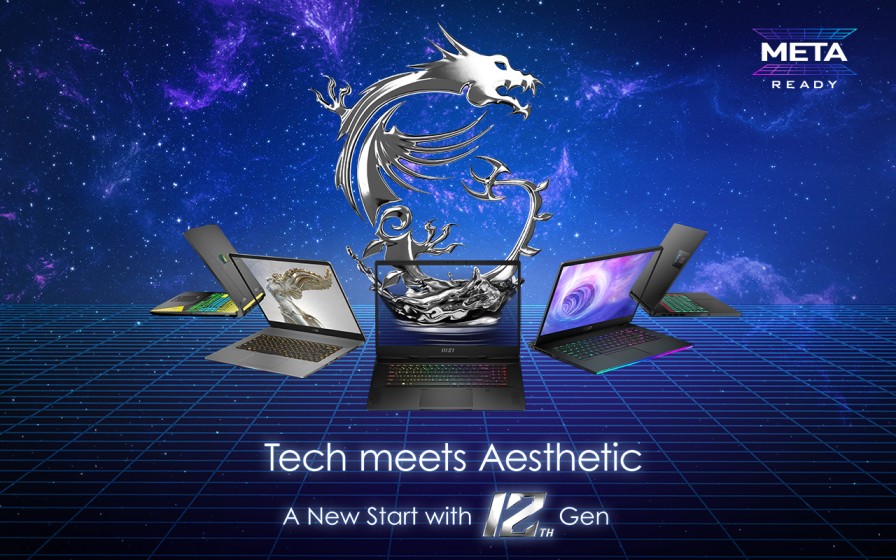 Also adding on to the delight of new gaming series laptops, MSI as a part of its early bird program will give its consumers a FREE $50 steam wallet code on the purchase of MSI 12th gen laptop till 15th March 2022.

NVIDIA GeForce RTX laptops include NVIDIA’s groundbreaking Ampere architecture, which includes 2nd generation RT Cores for ray tracing and 3rd generation Tensor Cores for DLSS and AI. For the first time, the GeForce RTX 3080 Ti Laptop GPU introduces the flagship 80 Ti class of GPUs to laptops. The RTX 3080 Ti outperforms the TITAN RTX on the desktop thanks to 16GB of the fastest GDDR6 RAM ever supplied in a laptop. The new GeForce RTX 3070 Ti is up to 70% faster than the RTX 2070 SUPER laptops, with 100 frames per second at 1440p resolution.

Commenting on the announcement, Mr. Green Lin, Regional Marketing Manager, MSI, said, “We are delighted to announce our new line-up of products for 2022 in the Indian market. With this new range which is an amalgamation of both creator and gaming laptops, we are entering a new era wherein human beings will interact with us through a combination of VR, AR, cloud systems, AI, and internet technology. We believe that MSI Gameverse laptops are the key to this evolution and will be well received by our Indian consumers. With the new laptops, we are not only providing the best performance products for gamers to exceed their capabilities but also providing the best efficiency for digital content creators to explore the infinite possibilities that lie ahead.”

The award-winning Stealth GS range of laptops is designed for gaming and professional applications. The GS77 features a new “core black” color and a zinc alloy hinge that is more robust. MSI managed to expand the touchpad and keycap size for a precise and comfortable typing experience despite the Z height being less than 21mm. It also includes six speakers for clear treble and punchy bass. For improved security and mobility, business gamers will appreciate the webcam lock switch and compatibility for up to 100W PD charging.

The MSI Raider GE series is the genuine show-stopper, with panoramic aurora lighting that provides an enticing sci-fi atmosphere. Even more impressive is the Raider GE series’ performance, which can reach up to 220W[1] with GeForce RTX 3080 Ti through MSI OverBoost thanks to MSI’s revolutionary thermal design. The MSI Raider Series offers players a quick and smooth gaming experience with screens up to 4K and the support of Discrete Graphics Mode.

The name “Vector” indicates MSI’s desire for the GP series to have all the power needed to move forward with a fulfilling experience in gaming, engineering, or scientific computing. The Vector’s performance can be increased to 210W with Cooler Boost 5 Technology and MSI OverBoost.

The Crosshair GL series is a collaboration between MSI and Ubisoft.  The series features a futuristic design with exclusive sci-fi elements inspired by the feeling and mood of gameplay and comes equipped with Intel® Core™ i7 processors and Cooler Boost 5 Technology. The graphic performance is at a maximized level – setting the Crosshair series apart from its competition. Crosshair GL Series comes in three variants: Crosshair 15, Crosshair 17, and the limited-edition Crosshair 15 Rainbow Six Extraction Edition that comes with an exclusive bundle pack.

The MSI Pulse GL76/66 keeps the design features by Maarten Verhoeven along with the titanium power armor inspired by Pulse energy for the Dragon Army to enhance agility and flexibility. Cooler Boost 5 increases airflow by 15%, even with a 33% reduction of wall thickness.

A new knight image with magical immortal might – “Dragon Power” – carrying an enchanted sword of victory is featured in the MSI Katana series. Justin Goby Fields, a well-known concept artist from the United States, designed this knight character. With a comfortable key travel of 1.7mm and Cooler Boost 5, the Katana series is geared to help gamers thrive.

MSI not only innovates with its hardware but also with its MSI Center software in order to provide the smartest laptops ever. MSI Smart Auto will automatically switch between the appropriate modes based on your usage, while Ambient Silent AI will detect ambient noise level (dB) and change fan speed to provide superior performance with a relatively quiet fan.