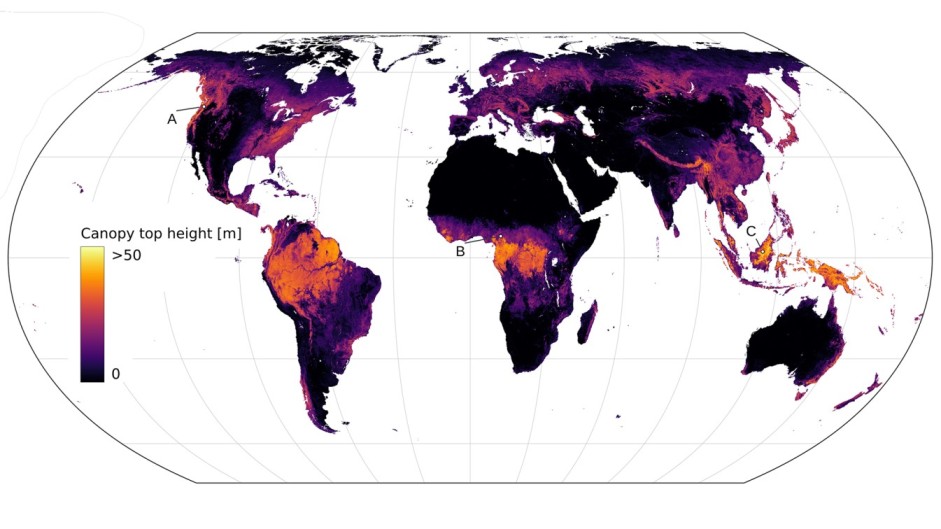 “Global high-resolution data on vegetation characteristics are needed to sustainably manage terrestrial ecosystems, mitigate climate change, and prevent biodiversity loss. With this project, we aim to fill the missing data gaps by merging data from two space missions with the help of deep learning,”

said Konrad Schindler, a Professor in the Department of Civil, Environmental, and Geomatic Engineering at ETH Zurich.

Forests, which absorb up to 2 billion tons of carbon dioxide each year and range from rainforests to boreal woodland, play an important role in climate mitigation. The quantity of carbon stored in a forest is correlated with aboveground biomass, which comprises all portions of the tree such as the trunk, bark, and branches.

Because tree height is frequently a predictor of biomass, exact measurements could aid in the development of more precise carbon sequestration data and climate science models. This data could potentially be used to guide forest management by identifying areas that require conservation, restoration, or reforestation.

For forest monitoring, many researchers have used AI-powered remote sensing models. However, because of the large amounts of data, these often work regionally and represent a computing difficulty. Models have also failed to accurately measure heights greater than 30 meters, resulting in underestimating of towering canopies.

Satellites are being used in a few current research to capture and measure vegetation from space. NASA’s Global Ecosystem Dynamics Investigation (GEDI) uses a space-borne laser scanner to study the structure of forests around the planet. However, it only takes small samples that span less than 4% of the world’s area.

Other international remote sensing missions provide comprehensive coverage. The Copernicus Sentinel-2 satellites take photographs with a resolution of 1010 meters per pixel every 5 days, covering the entire planet. However, it only sees the vegetation from above and does not measure height.

When the models are up and running, they automatically process over 250,000 images and estimate canopy height for the map at a 10-meter ground-sampling distance. It takes 10 days to cover the globe using a high-performance cluster equipped with NVIDIA RTX 2080 GPUs. According to Schindler, ETH Zurich’s high-performance computing system Euler, contains a variety of GPUs running over 1,500 graphics cards.

By modeling the uncertainty in the data and using an ensemble of five separately trained CNNs the models have a level of transparency not often seen in deep learning algorithms. Uncertainty is quantified for every single pixel estimate, which could give researchers and forest managers confidence when making decisions based on the information.

The researchers found that protected areas, such as the Oregon Coast Range and the Ulu Temburong National Park in Borneo often contained higher vegetation. About 34% of canopies taller than 30 meters grow in these areas.

According to the study, the model can be deployed annually to track canopy height change over time. The researchers also point out that the maps could be used to evaluate regions where wildfires have occurred, giving a more accurate map of damage.

“We hope that this work will advance future research in climate, carbon, and biodiversity modeling. We also hope that our freely available map can support the work of conservationists in practice. In the future, we would like to expand our approach to mapping biomass as well as temporal changes on a global scale

said lead author Nico Lang, a PhD student in the EcoVision Lab, part of the Photogrammetry and Remote Sensing group at ETH Zürich.