Quantum technology may one day make charging electric cars as quick as filling up a gas tank. 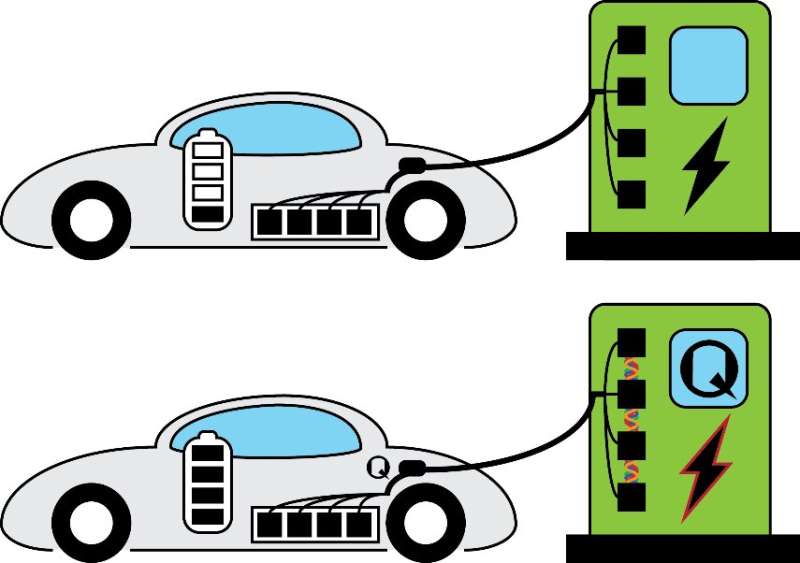 Quantum technology may one day make charging electric cars as quick as filling up a gas tank.

Quantum charging will cut the charging time of electric vehicles from ten hours to three minutes.

Whether it’s photovoltaics or fusion, human society will have to switch to sustainable energy sources sooner or later. Given humanity’s ever-increasing energy demands and the finite nature of fossil fuels, this is deemed unavoidable. Many studies have been conducted in order to create alternative energy sources, the majority of which utilize electricity as the primary energy carrier. As the world adopted new renewable products and devices, substantial R&D in renewables was accompanied by incremental societal shifts. The rapid adoption of electric vehicles has been the most noticeable change. Millions of electric automobiles are sold each year, despite the fact that they were rarely seen on the roads merely ten years ago. One of the fastest-growing industries is electric vehicles.

Unlike regular cars, which get their power from the combustion of hydrocarbon fuels, electric vehicles get their power from batteries. For a long time, batteries had a lower energy density than hydrocarbons, which resulted in early electric vehicles having relatively short ranges. However, as battery technology improved, electric car ranges became more acceptable in comparison to gasoline-powered vehicles. It goes without saying that one of the major technical hurdles that had to be overcome in order to spark the present electric vehicle revolution was the advancement of battery storage technology.

Despite significant advancements in battery technology, today’s electric vehicle owners face a new challenge: poor battery charging speeds. At the moment, it takes roughly 10 hours to fully recharge an automobile at home. Even the most powerful superchargers at charging stations take 20 to 40 minutes to fully recharge the automobiles. Customers will incur additional fees and inconvenience as a result of this.

To solve this dilemma, scientists turned to quantum physics for solutions. Their research has led them to believe that quantum technologies could provide new ways to charge batteries more quickly. Alicki and Fannes proposed quantum battery technology in a seminal work released in 2012. Quantum resources, such as entanglement, have been proposed as a way to dramatically speed up the battery charging process by charging all cells in the battery at the same time in a collective manner.

This is especially intriguing because new high-capacity batteries can have several cells. In traditional batteries, where the cells are charged in parallel and independently of one another, such collective charging is not conceivable. The quantum charging advantage ratio can be used to calculate the benefit of collective versus parallel charging. Researchers discovered two probable sources of quantum advantage in 2017, notably global operation (in which all cells communicate with each other simultaneously, i.e., “all seated at one table”) and all-to-all coupling (i.e., “many discussions, but every discussion has only two participants”). However, it is uncertain whether both of these sources are required, and whether the charging speed that can be reached is limited.

Scientists at the Institute for Basic Science’s Center for Theoretical Physics of Complex Systems have recently delved deeper into these issues. The work, which was picked as an Editors Suggestion in the journal Physical Review Letters, demonstrated that in quantum batteries, the all-to-all coupling is irrelevant and that the presence of global operations is the sole factor that contributes to the quantum advantage. The scientists went on to establish the exact source of this benefit while excluding all other options, and even presented a method for building such batteries explicitly.

Furthermore, the team was able to properly quantify the amount of charging speed that may be obtained using this method. While the maximum charging speed of conventional batteries increases linearly with the number of cells, the study found that quantum batteries using global operation can achieve quadratic charging speed scaling. Consider a typical electric vehicle with a battery containing approximately 200 cells. The use of quantum charging would result in a 200-fold speedup over traditional batteries, reducing charging time from 10 hours to around 3 minutes at home. The charge time would be reduced from 30 minutes to seconds at high-speed charging stations.

According to the researchers, quantum charging has far-reaching ramifications that extend beyond electric cars and consumer devices. It might, for example, play a crucial role in future fusion power plants that require massive amounts of energy to be charged and discharged in a matter of seconds. Quantum technologies, of course, are still in their infancy, and there is still a long way to go before these methods can be put into reality. However, research findings like this point in the right direction and can encourage funding agencies and corporations to invest more in these technologies.