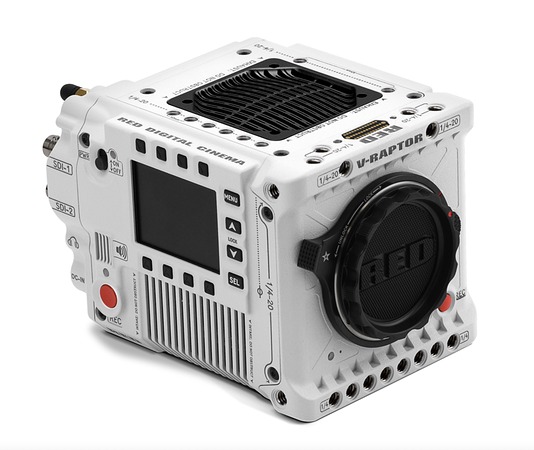 Red’s new V-Raptor ST cinema camera can record 8k 120 fps. The V-RAPTOR ST is the most advanced and powerful RED cinema camera to date. V-RAPTOR stands alone at the vanguard of digital image capture technology as the brand’s new flagship system and sensor, as well as the first entrant into the new DSMC3 series of cameras.

The V-RAPTOR ST, RED Digital Cinema’s latest flagship 8K cinema camera, can capture REDCODE RAW footage at up to 120 frames per second. The $24,500 cinema camera, which has a Canon RF lens adapter, is the first of RED’s new DSMC3 series of cameras, and it packs a lot of functions into a small package.

With the capacity to shoot 8K Large Format or 6K S35, it unlocks the largest lens selection of any comparable camera on the market, allowing photographers to always deliver at over 4K. The sensor also has the largest recorded dynamic range of any RED camera, as well as the fastest cinema-quality scan time yet recorded. With a dynamic range of over 17 stops and scan rates 2x faster than any prior RED camera, users may capture up to 600 frames per second in 2K at up to 600 frames per second. V-RAPTOR will also keep RED’s proprietary REDCODE RAW codec, which allows users to shoot 16-bit RAW and employ RED’s current IPP2 workflow and color management.

The V-RAPTOR includes a redesigned platform, as well as a new flagship sensor, all in a remarkably small package weighing a little over 4 lbs. This system can handle practically anything a shooter can throw at it, with two 4K 12G-SDI outputs, XLR audio and phantom power via an adapter, and a 1080p live stream.

Two 4K 12G-SDI outputs and an XLR audio interface with phantom power via adaptor are among the other connectors. Wireless connectivity will also be available, allowing for the transmission of a 1080p live preview video over 2.4GHz/5GHz Wi-Fi for composing pictures. The menu is navigated and the current settings and connections are displayed on an inbuilt 2.4″ LCD display.

The camera is made of aluminum alloy, which helps it stay under 4 pounds (1.8 kilograms), and it incorporates a V-Lock battery interface that is suited for Micro V-Lock batteries. Its 11–17V 6-pin DC-IN connector can, of course, be powered by other sources.

Via Wi-Fi or USB-C, the V-RAPTOR ST connects to Android and iOS devices. Compatible mobile devices can be utilized as a LiveView display in addition to manipulating the camera’s settings wirelessly.

On RED’s website, you can learn more and, if your wallet allows it, place an order at https://www.red.com/