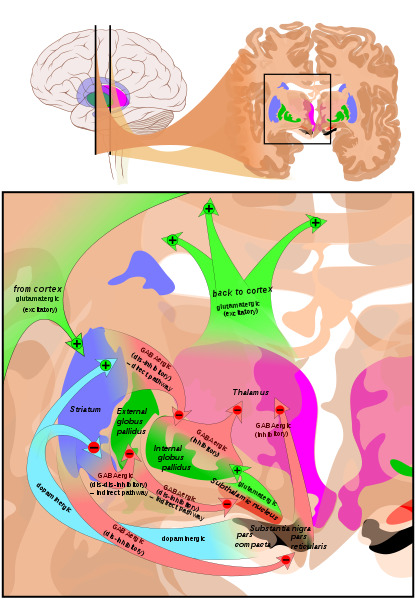 University of Iowa researchers have confirmed in a new study that a specific region in the brain is critical to governing the mind’s communication with the body’s motor control system. The findings could yield advances in treatment for Parkinson’s disease, as declining motor coordination is a central symptom of the disorder.

In experiments with humans, the researchers pinpointed the subthalamic nucleus as the region in the brain that communicates with the motor system to help the body stop an action. This communication is vital because it helps humans avoid surprises and react to potentially dangerous or unforeseen circumstances.

The subthalamic nucleus is a tiny grouping of cells that is part of the basal ganglia, which is a key circuit in controlling movement. The basal ganglia takes initial motor commands generated in the brain and either amplify or halt specific parts of those commands as they pass from the central nervous system to the spinal cord.

“You can think of the subthalamic nucleus as the core region in this ‘halting’ of extra, unwanted components of compound movements, as it is the last relay station before the output nuclei of the basal ganglia, which then communicates these commands to the wider motor system,”

says Jan Wessel, associate professor in the Department of Psychological and Brain Sciences at Iowa and the corresponding author on the study.

Previous research had indicated the subthalamic nucleus’ role in this stage of brain-motor control communication, but the hypothesis had not been directly tested in humans until now. To do that, the researchers used some ingenious techniques. First, they recruited 20 patients who have Parkinson’s disease, which affects motor control. These patients had implanted deep-brain stimulators, which the researchers used to activate or deactivate the subthalamic nucleus. They then tracked those changes to motor-control activity through a simple stop-action task, monitoring the brain-motor control responses through a technique called transcranial magnetic stimulation.

Parkinson’s disease patients are treated regularly with deep-brain stimulation, but the addition of transcranial magnetic stimulation allowed the researchers to confirm the subthalamic nucleus’ definitive role. Wessel partnered on the experiments with Jeremy Greenlee, professor and the Arnold H. Menezes Chair in the Department of Neurosurgery, who cares for patients with Parkinson’s disease.

“Deep-brain stimulation is the only method to causally and systematically influence the activity of deeply embedded brain nuclei like the subthalamic nucleus in awake, behaving humans,” says Wessel, also an associate professor in the Department of Neurology. “However, combining deep-brain stimulation with transcranial magnetic stimulation is a highly complicated and novel technical endeavor, especially in awake, behaving humans.”

The subthalamic nucleus–motor control link is important, Wessel says, because it puts to rest a central question in the brain’s communication with the body’s motor system, especially how an initiated action is suddenly halted. But it has potential benefits to patients, too.

“The subthalamic nucleus is a key therapeutic target in Parkinson’s disease,” Wessel says. “Indeed, just like it was done for the patient sample in our study, implantation of stimulation electrodes into the subthalamic nucleus is a highly successful treatment option for the motoric symptoms of Parkinson’s disease. Our study provides some mechanistic insights into this potential patient-care benefit.”

The study was published in Current Biology.