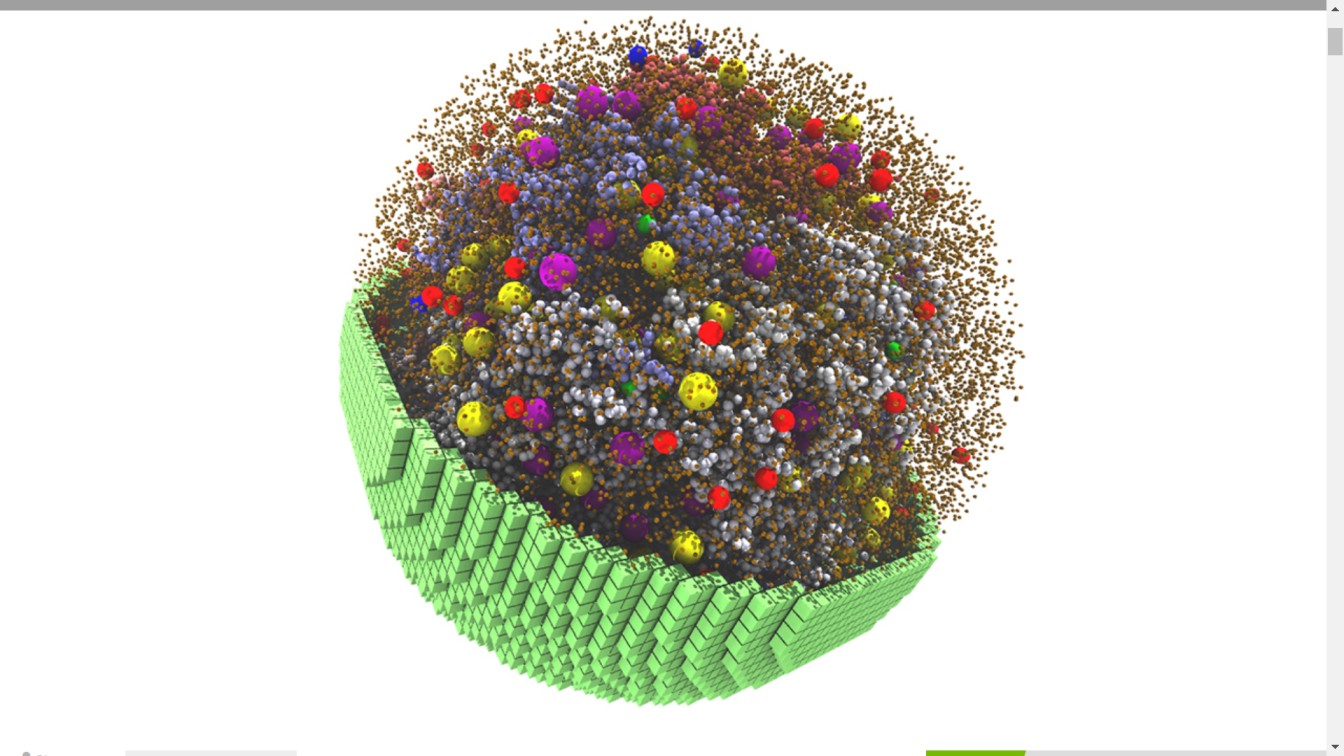 Researchers from the University of Illinois at Urbana-Champaign developed GPU-accelerated software to simulate a 2-billion-atom cell that metabolizes and grows like a living cell.

Every live cell is a bustling microcosm with thousands of components that are responsible for energy production, protein synthesis, gene transcription, and other functions.

Scientists at the University of Illinois at Urbana-Champaign have created a completely dynamic model that mimics the activity of a living cell by simulating these physical and chemical features at the particle scale.

The experiment, which was published in the journal Cell, models a living minimal cell with a reduced set of genes required for survival, function, and reproduction. The model uses NVIDIA GPUs to replicate 7,000 genetic information processes throughout the course of a 20-minute cell cycle, making it the longest and most sophisticated cell simulation to date, according to the researchers.

Minimal cells are simpler than actual cells, making them easier to digitally replicate.

“Even a minimal cell requires 2 billion atoms,” said Zaida Luthey-Schulten, chemistry professor and co-director of the university’s Center for the Physics of Living Cells. “You cannot do a 3D model like this in a realistic human time scale without GPUs.”

Whole-cell models, once further validated and refined, can aid scientists in predicting how changes in the environment or genomes of real-world cells would alter their function. Even at this stage, however, modest cell simulation can provide scientists with insight into the physical and chemical processes that underpin living cells.

“What we found is that fundamental behaviors emerge from the simulated cell — not because we programmed them in, but because we had the kinetic parameters and lipid mechanisms correct in our model,” she said.

Lattice Microbes, the GPU-accelerated software co-developed by Luthey-Schulten and used to simulate the 3D minimal cell, is available on the NVIDIA NGC software hub.

The Illinois researchers created the living cell model by simulating one of the simplest living cells, mycoplasma, a parasitic microbe. They built the model on a trimmed-down version of a live mycoplasma cell created by scientists at the J. Craig Venter Institute in La Jolla, Calif.

Luthy-team Schulten’s then built out the model with DNA, RNA, proteins, and membranes using known aspects of mycoplasma’s inner workings, such as amino acids, nucleotides, lipids, and small molecule metabolites.

“We had enough of the reactions that we could reproduce everything known,” she said.

The researchers did a 20-minute 3D simulation of the cell’s life cycle before it begins to significantly enlarge or copy its DNA, using Lattice Microbes software on NVIDIA Tensor Core GPUs. The model revealed that the parasite cell spent the majority of its energy transferring chemicals across the cell membrane, which fits its parasitic profile.

“If you did these calculations serially, or at an all-atom level, it’d take years,” said graduate student and paper lead author Zane Thornburg. “But because they’re all independent processes, we could bring parallelization into the code and make use of GPUs.”

Thornburg is now working on a GPU-accelerated project that will replicate 3D growth and cell division. To speed up their work, the team recently switched to NVIDIA DGX systems using RTX A5000 GPUs, and discovered that employing A5000 GPUs sped up benchmark simulation time by 40% when compared to a development workstation with a previous-generation NVIDIA GPU.