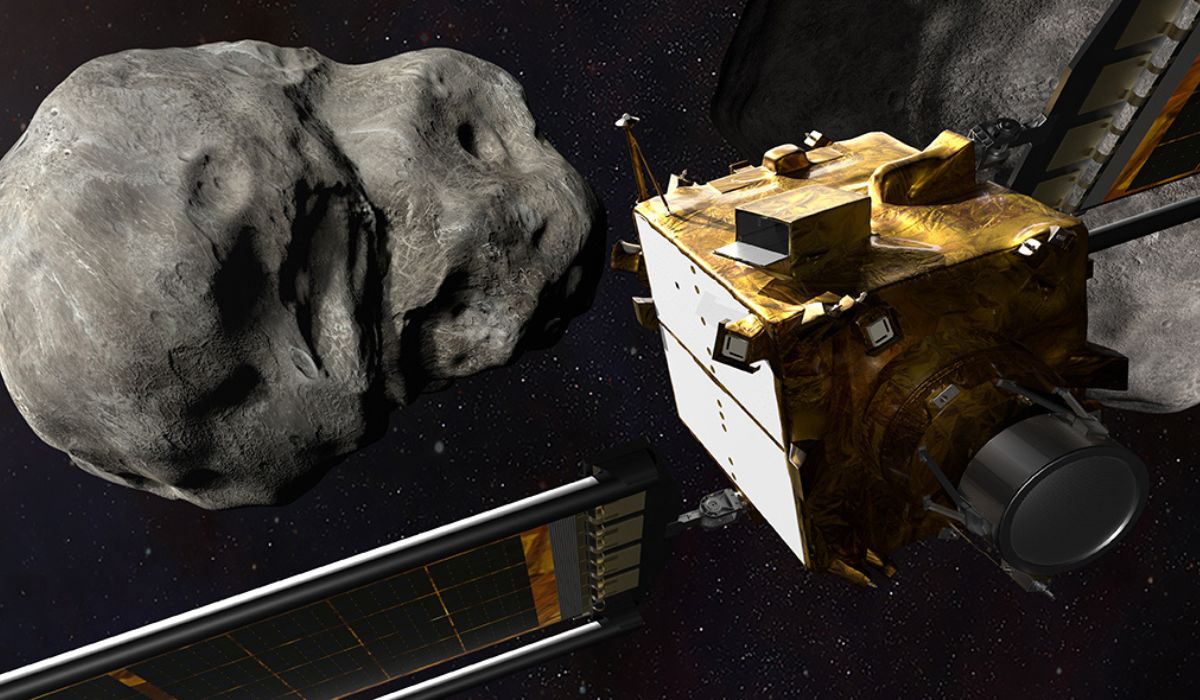 As NASA’s DART spacecraft cruises toward its highly-anticipated Sept. 26 encounter with the binary asteroid Didymos, the spacecraft’s imager — the Didymos Reconnaissance and Asteroid Camera for Optical navigation, or DRACO — has snapped thousands of pictures of stars. The pictures give the Johns Hopkins Applied Physics Laboratory (APL) team leading the mission for NASA the data necessary to support ongoing spacecraft testing and rehearsals in preparation for the spacecraft’s kinetic impact into Dimorphos, the moon of Didymos.

As the only instrument on DART, DRACO will capture images of Didymos and Dimorphos; it will also support the spacecraft’s autonomous guidance system — the Small-body Maneuvering Autonomous Real Time Navigation (SMART Nav) — to guide DART to impact.

On July 1 and August 2 the mission operations team pointed the DRACO imager to Jupiter to test the SMART Nav system. The team used it to detect and target Jupiter’s moon Europa as it emerged from behind Jupiter, similar to how Dimorphos will visually separate from the larger asteroid Didymos in the hours leading up to impact. While the test obviously didn’t involve DART colliding with Jupiter or its moons, it did give the APL-led SMART Nav team the chance to assess how well the SMART Nav system performs in flight. Before this Jupiter test, SMART Nav testing was done via simulations on the ground.

The SMART Nav team gained valuable experience from the test, including for how the SMART Nav team views data from the spacecraft. “Every time we do one of these tests, we tweak the displays, make them a little bit better and a little bit more responsive to what we will actually be looking for during the real terminal event,” said Peter Ericksen SMART Nav software engineer at APL.

The DART spacecraft is designed to operate fully autonomously during the terminal approach, but the SMART Nav team will be monitoring how objects are tracked in the scene, including their intensities, number of pixels, and how consistently they’re being identified. Corrective action using preplanned contingencies will only be taken if there are significant and mission-threatening deviations from expectations. With Jupiter and its moons, the team had a chance to better understand how the intensities and number of pixels of objects might vary as the targets move across the detector.

The image below—taken when DART was approximately 16 million miles (26 million km) from Earth with Jupiter approximately 435 million miles (700 million km) away from the spacecraft—is a cropped composite of a DRACO image centered on Jupiter taken during one of these SMART Nav tests. Two brightness and contrast stretches, made to optimize Jupiter and its moons, respectively, were combined to form this view. From left to right are Ganymede, Jupiter, Europa, Io, and Callisto.

“The Jupiter tests gave us the opportunity for DRACO to image something in our own solar system,” said Carolyn Ernst, DRACO instrument scientist at APL. “The images look fantastic, and we are excited for what DRACO will reveal about Didymos and Dimorphos in the hours and minutes leading up to impact!”

DRACO is a high-resolution camera inspired by the imager on NASA’s New Horizons spacecraft that returned the first close-up images of the Pluto system and of the Kuiper Belt object Arrokoth.

DART was developed and is managed by APL for NASA’s Planetary Defense Coordination Office. DART is the world’s first planetary defense test mission, intentionally executing a kinetic impact into Dimorphos to slightly change its motion in space. While no known asteroid poses a threat to Earth, the DART mission will demonstrate that a spacecraft can autonomously navigate to a kinetic impact on a relatively small target asteroid, and that this is a viable technique to deflect a genuinely dangerous asteroid, if one were ever discovered. DART will reach its target on September 26, 2022.

SMART NAV GIVING SPACECRAFT THE POWER TO GUIDE THEMSELVES

In person, SMART Nav doesn’t look like much. It’s in a metal square that’s laced into a web of soldered wires, resistors and diodes on a circuit board. In fact, technologically speaking, it’s a microprocessor that isn’t even state of the art. It has the same power as a PlayStation 1 from 21 years ago. Your smartphone has more power.

“If you use the latest and greatest electronics that pack millions and millions of transistors into them, it turns out the device becomes more susceptible to radiation,” explained David Carrelli, a guidance, navigation and control analyst at the Johns Hopkins Applied Physics Laboratory (APL) in Laurel, Maryland, who served as the guidance and control lead for majority of the development of NASA’s Double Asteroid Redirection Test (DART) spacecraft. “It can’t fly in space without a lot of modifications.”

But what SMART Nav does is far from antiquated. It’s unlike anything used on a spacecraft before it.

Short for Small-body Maneuvering Autonomous Real Time Navigation, SMART Nav is a set of computational algorithms on DART, a mission that will test our ability to redirect one of these space rocks by striking it with a spacecraft. It’s a method that one day could protect Earth from catastrophe. And for the spacecraft’s last four hours of existence — a period called the terminal phase — SMART Nav, with the rest of DART’s guidance and navigation system, will independently find Dimorphos and guide the spacecraft into it.

From the outset of DART’s development, scientists knew the mission would need some autonomous component. Directing a spacecraft to hit a small asteroid several million miles from Earth at 13,421 mph (21,600 kph) just wasn’t feasible. The round-trip light time between a command and registering its execution would be 1.5 minutes — too delayed for a spacecraft that covers more than 200 miles every minute.

“We can’t joystick the ride from the ground, if you will” said Michelle Chen, the SMART Nav lead at APL. “So there’s a need for the SMART Nav algorithm to be onboard to make those decisions.”

SMART Nav started out as an internally developed project at APL, coming together at the same time DART was being formulated. Chen, with a team of APL engineers, led that development, knowing this type of autonomous system had to be very different from anything previous.

“Most of the autonomy that is on spacecraft is rule-based — if a sensor reads ‘A,’ autonomy responds with ‘B’,” Chen explained. “It’s all preplanned and prescribed.”

SMART Nav, and really DART’s entire guidance and control system, or G&C, couldn’t work that way. It had to be free to self-inform and make decisions on its own.

“With SMART Nav, it’s no longer about just keeping the spacecraft in a prescribed orientation or carrying out correction maneuvers. It’s about conducting the entirety of the last four hours of the mission without any human intervention,” said Mark Jensenius, a guidance, navigation and control engineer on the SMART Nav team at APL. “It’s about locating objects in space, selecting the correct asteroid, estimating trajectory corrections and commanding maneuvers on-the-fly to achieve the higher-level directive of ‘hit Dimorphos.’”

In many ways, it was like developing a self-guided missile — a process APL has a rich history of doing.

Unlike missiles, which are nimble and take only seconds, minutes or maybe an hour to reach their targets, DART takes hours of guidance and course correction, regularly inching up, down and side to side. And the spacecraft is anything but agile. Like a lumbering giant, DART’s ability to maneuver during the terminal phase is limited — just 1/10,000th of a g-force.

DART also must burn propellant when maneuvering, rather than using aerodynamic surfaces such as fins. Propellant takes up space, increases the spacecraft’s weight and, importantly, can significantly drive up the mission’s cost. So DART is designed to operate with a minimal amount of propellant, which must be used judiciously.

“We have to be really clever about when we do and don’t maneuver,” Jensenius said, tweaking the algorithms so no matter what DART encounters, SMART Nav will make the smartest choice about when and where to maneuver.

“And then we need to be able to collect data at the very end of this,” he added. Because of its 18-meter-long (59-foot-long) solar panels, DART shakes with every maneuver, which causes fuzzy images. That’s not a problem for SMART Nav; so long as the G&C system keeps the spacecraft facing the right way, SMART Nav can still find Dimorphos and set course. But for scientists trying to track individual craters so they can deduce precisely where DART impacts, blurry images are problematic. So the spacecraft has to coast for the last couple of minutes of its existence.