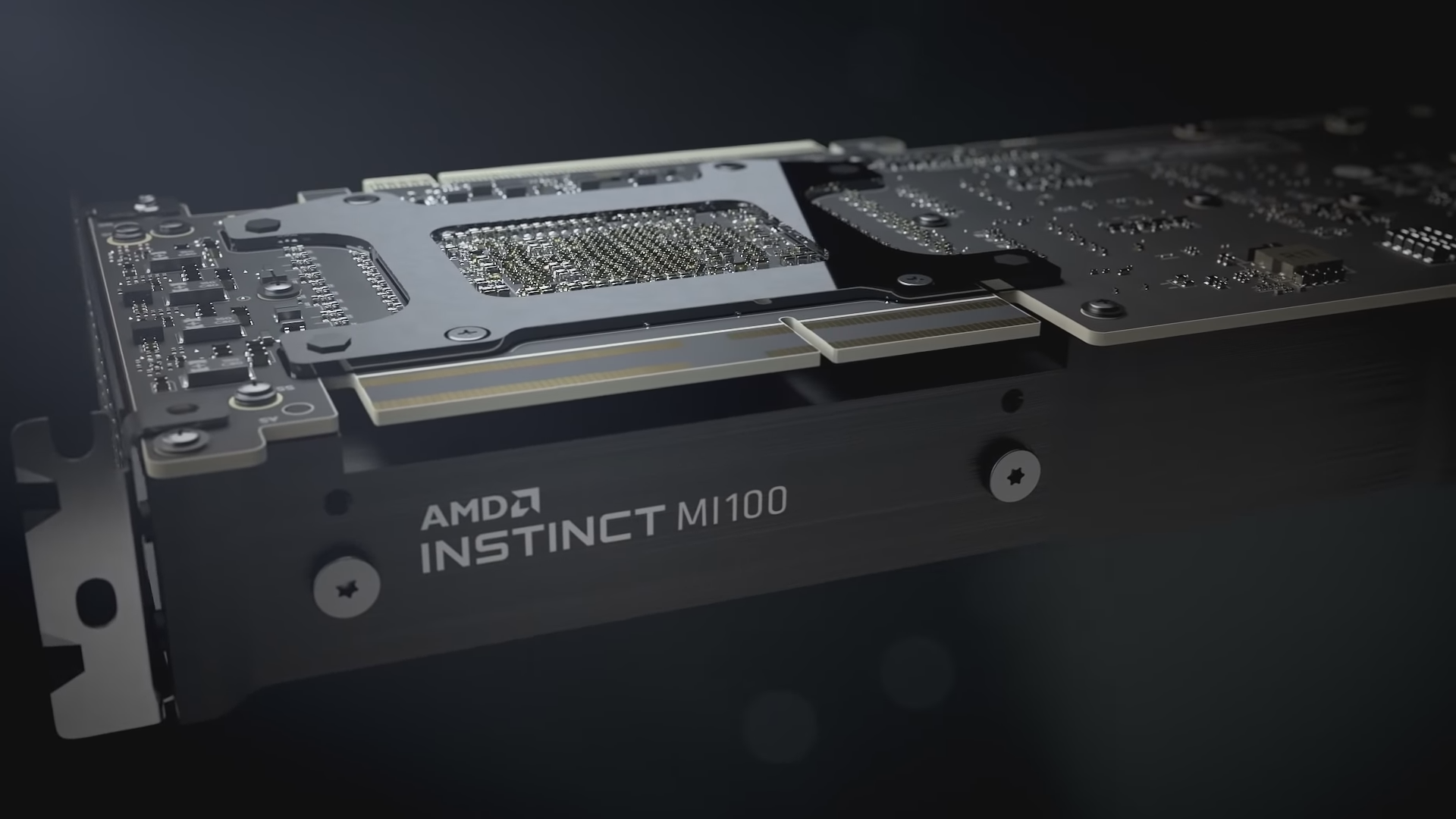 AMD is competing with Nvidia A100. Nvidia also announced the A100 80 GB claiming to be World’s Most Powerful GPU for AI Supercomputing. The A100 got HBM2E upgrade as per Nvidia’s announcement. Supported by new accelerated compute platforms from Dell, GIGABYTE, HPE, and Supermicro, the MI100, combined with AMD EPYC™ CPUs and the ROCm™ 4.0 open software platform, is designed to propel new discoveries ahead of the exascale era. Built on the new AMD CDNA architecture, the AMD Instinct MI100 GPU enables a new class of accelerated systems for HPC and AI when paired with 2nd Gen AMD EPYC processors. The MI100 offers up to 11.5 TFLOPS of peak FP64 performance for HPC and up to 46.1 TFLOPS peak FP32 Matrix performance for AI and machine learning workloads2. With new AMD Matrix Core technology, the MI100 also delivers a nearly 7x boost in FP16 theoretical peak floating-point performance for AI training workloads compared to AMD’s prior generation accelerators.

Exascale computing refers to computing systems capable of calculating at least 10¹⁸ floating point operations per second (1 exaFLOPS). The terminology generally refers to the performance of supercomputer systems and although no single machine has reached this goal as of June 2020, there are systems being designed to reach this milestone. In April 2020, the distributed computing Folding@home network attained one exaFLOPS of computing performance

“Today AMD takes a major step forward in the journey toward exascale computing as we unveil the AMD Instinct MI100 – the world’s fastest HPC GPU,” said Brad McCredie, corporate vice president, Data Center GPU and Accelerated Processing, AMD. “Squarely targeted toward the workloads that matter in scientific computing, our latest accelerator, when combined with the AMD ROCm open software platform, is designed to provide scientists and researchers a superior foundation for their work in HPC.”

The AMD ROCm developer software provides the foundation for exascale computing. As an open source toolset consisting of compilers, programming APIs and libraries, ROCm is used by exascale software developers to create high performance applications. ROCm 4.0 has been optimized to deliver performance at scale for MI100-based systems. ROCm 4.0 has upgraded the compiler to be open source and unified to support both OpenMP® 5.0 and HIP. PyTorch and Tensorflow frameworks, which have been optimized with ROCm 4.0, can now achieve higher performance with MI1007,8. ROCm 4.0 is the latest offering for HPC, ML and AI application developers which allows them to create performance portable software.

“We’ve received early access to the MI100 accelerator, and the preliminary results are very encouraging. We’ve typically seen significant performance boosts, up to 2-3x compared to other GPUs,” said Bronson Messer, director of science, Oak Ridge Leadership Computing Facility. “What’s also important to recognize is the impact software has on performance. The fact that the ROCm open software platform and HIP developer tool are open source and work on a variety of platforms, it is something that we have been absolutely almost obsessed with since we fielded the very first hybrid CPU/GPU system.”

Key capabilities and features of the AMD Instinct MI100 accelerator include:

The AMD Instinct MI100 accelerators are expected by end of the year in systems from major OEM and ODM partners in the enterprise markets, including:

“Dell EMC PowerEdge servers will support the new AMD Instinct MI100, which will enable faster insights from data. This would help our customers achieve more robust and efficient HPC and AI results rapidly,” said Ravi Pendekanti, senior vice president, PowerEdge Servers, Dell Technologies. “AMD has been a valued partner in our support for advancing innovation in the data center. The high-performance capabilities of AMD Instinct accelerators are a natural fit for our PowerEdge server AI & HPC portfolio.”

“We’re pleased to again work with AMD as a strategic partner offering customers server hardware for high performance computing,” said Alan Chen, assistant vice president in NCBU, GIGABYTE. “AMD Instinct MI100 accelerators represent the next level of high-performance computing in the data center, bringing greater connectivity and data bandwidth for energy research, molecular dynamics, and deep learning training. As a new accelerator in the GIGABYTE portfolio, our customers can look to benefit from improved performance across a range of scientific and industrial HPC workloads.”

“Customers use HPE Apollo systems for purpose-built capabilities and performance to tackle a range of complex, data-intensive workloads across high-performance computing (HPC), deep learning and analytics,” said Bill Mannel, vice president and general manager, HPC at HPE.  “With the introduction of the new HPE Apollo 6500 Gen10 Plus system, we are further advancing our portfolio to improve workload performance by supporting the new AMD Instinct MI100 accelerator, which enables greater connectivity and data processing, alongside the 2nd Gen AMD EPYC™ processor. We look forward to continuing our collaboration with AMD to expand our offerings with its latest CPUs and accelerators.”

“We’re excited that AMD is making a big impact in high-performance computing with AMD Instinct MI100 GPU accelerators,” said Vik Malyala, senior vice president, field application engineering and business development, Supermicro. “The combination of the compute power gained with the new CDNA architecture, along with the high memory and GPU peer-to-peer bandwidth the MI100 brings, our customers will get access to great solutions that will meet their accelerated compute requirements and critical enterprise workloads. The AMD Instinct MI100 will be a great addition for our multi-GPU servers and our extensive portfolio of high-performance systems and server building block solutions.”