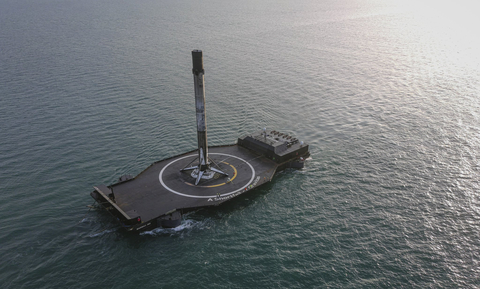 The rocket recovery droneships are modified to include an expanded deck to increase the size of the landing platform, four thruster engines for propulsion and to hold on station, and blast shielding to protect electrical and engine equipment on deck. The droneships are entirely unmanned during landings, with a robot deployed on board to secure the rocket booster to the droneship before the vessel returns to port.

When on station for a landing, an autonomous spaceport drone ship (ASDS) is an ocean-going vessel derived from a deck barge, equipped with station-keeping engines and a wide landing platform, and is autonomously controlled. SpaceX commissioned the construction of such ships to allow for the recovery of launch vehicle first stages at sea for missions that do not have enough fuel to return to the launch site after launching spacecraft into orbit or interplanetary orbit.

Just Read the Instructions (II) (JRTI) and A Shortfall of Gravitas (ASOG), both operating in the Atlantic for launches from Kennedy Space Center and Cape Canaveral Space Force Station, and Of Course I Still Love You (OCISLY), operating in the Pacific for missions from Vandenberg Space Force Base, are the three operational drone ships for SpaceX. JRTI launched Vandenberg Air Force Base launches in the Pacific Ocean from 2016 to 2019, before departing the Port of Los Angeles in August 2019.

The project will review the design of one of SpaceX’s three rocket recovery droneships for compliance with the ABS Guide for Autonomous and Remote-Control Functions. Due to the unique and challenging operating requirements, ABS will apply a risk-based approach to the evaluation of the autonomous functions.

“Through our work on autonomous and remote-control technologies in projects with leading partners all over the world, ABS has been leading the way in supporting its practical application at sea. This makes us ideally placed to work with SpaceX on its unique and exciting project. We are proud that our capabilities in this area have been recognized by a true pioneer such as SpaceX,”

ABS is a world leader in supporting the development of autonomous and remote-control functions at sea. A remotely operated harbor tug developed by Keppel Offshore & Marine was the first in the world to receive the ABS REMOTE-CON Notation in October 2021.