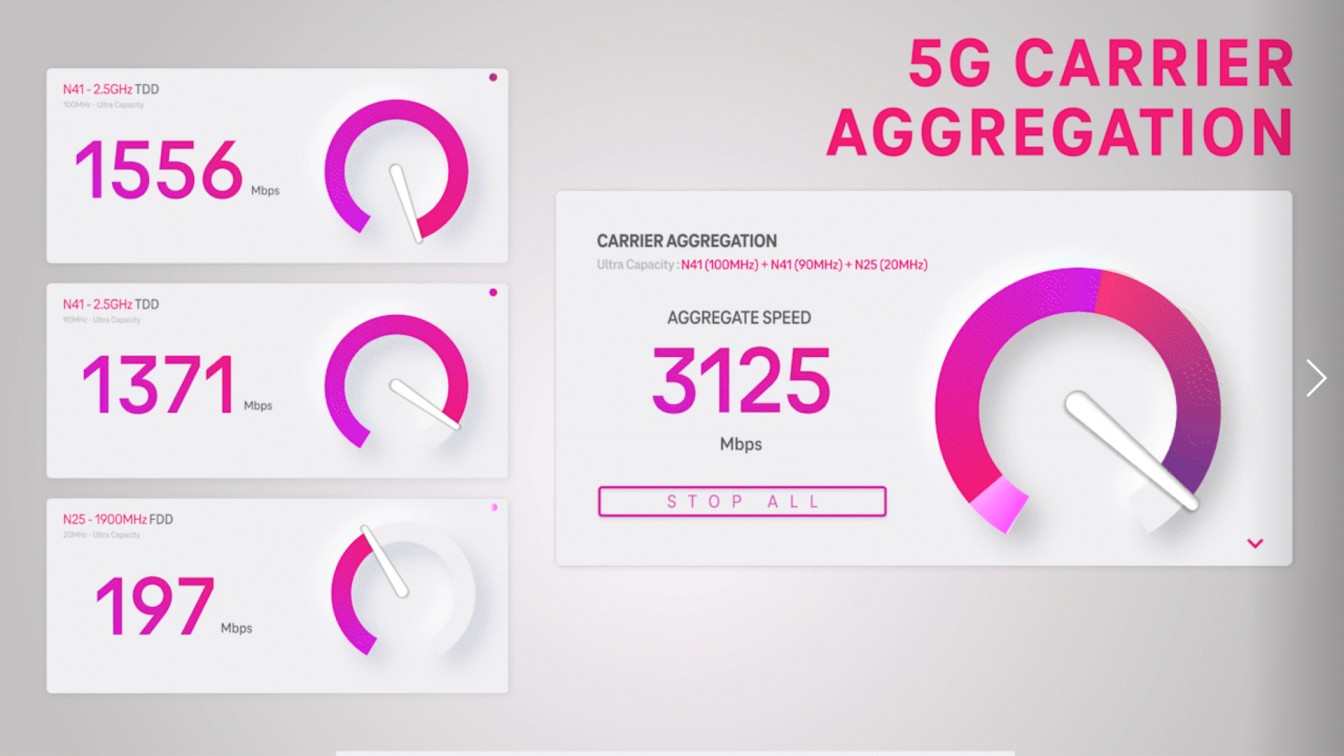 T-Mobile pulled off the feat with help from Ericsson, Nokia, Samsung and Qualcomm Technologies, Inc.

BELLEVUE, Was, June 14, 2022 – The Un-carrier feels the need. The need for speed. T-Mobile (NASDAQ: TMUS) announced today it was able to aggregate three channels of mid-band 5G spectrum, reaching speeds over 3 Gbps on its standalone 5G network. It’s the first time the test has ever been done with a commercial device (Samsung Galaxy S22 powered by Snapdragon® 8 Gen 1 Mobile Platform with Snapdragon X65 Modem-RF System) on a live production network.

“This test demonstrates the incredible power of mid-band spectrum and represents another huge step forward for standalone 5G,” said Neville Ray, President of Technology at T-Mobile. “Only T-Mobile is delivering a nationwide standalone 5G network to customers today, and we’re blazing a trail with new performance-boosting capabilities that generate incredible speeds and deliver on our vision to create the highest capacity network in the country.”

Today’s achievement is only possible with standalone 5G architecture (SA) and is just the latest in a series of important SA 5G milestones for T-Mobile. The Un-carrier was the first in the world to launch a nationwide SA 5G network nearly two years ago and has been driving toward a true 5G-only experience for customers ever since. Just this month the Un-carrier began lighting up Voice over 5G (VoNR) so ALL services can run on 5G. By removing the need for an underlying 4G LTE network and 4G core, 5G will be able to reach its true future potential with incredibly fast speeds, real-time responsiveness and massive connectivity.

NR CA is live in parts of T-Mobile’s network today, combining two 2.5 GHz 5G channels for greater speeds, performance and capacity. Customers with the Samsung Galaxy S22 will be among the first to experience a third 1900 MHz 5G channel later this year. This capability will expand across the Un-carrier’s network and to additional devices in the near future.

T-Mobile is the leader in 5G with the country’s largest and fastest (based on median, overall combined 5G speeds according to analysis by Ookla® of Speedtest Intelligence® data 5G download speeds for Q1 2022. See 5G device, coverage, & access details at T-Mobile.com.) 5G network. The Un-carrier’s Extended Range 5G covers nearly everyone in the country – 315 million people across 1.8 million square miles. 225 million people nationwide are covered with super-fast Ultra Capacity 5G, and T-Mobile expects to cover 260 million in 2022 and 300 million next year.