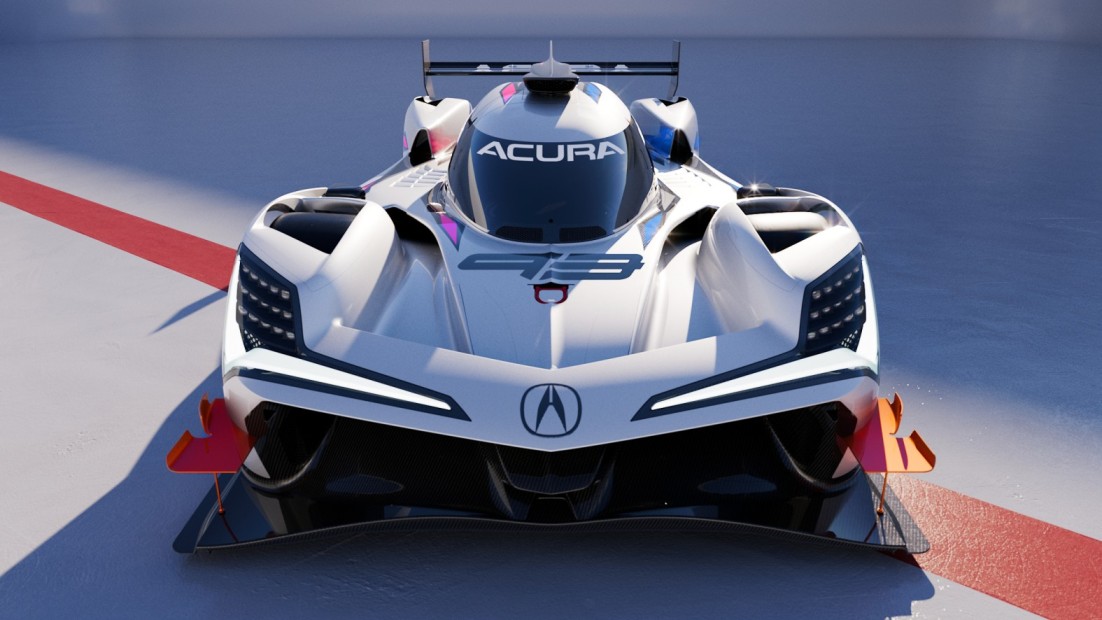 August 17, 2022 — MONTEREY, Calif. – Acura Motorsports today released the first official images and details for the all-new, electrified Acura ARX-06 prototype sports car, which will make its competition debut next January at the Rolex 24 at Daytona.

The public unveiling will take place Friday, August 19, at The Quail, a Motorsports Gathering, in Carmel, California.

“Precision Crafted Performance is at the heart of everything Acura does,” said Jon Ikeda, vice president and Acura brand officer. “If you’re a performance brand, you have to go racing. It’s that simple. Both the existing ARX-05 prototype and our production-based NSX GT3 have proven to be race- and championship-winning designs on tracks all across North America. Now, with the introduction of the new, electrified Acura ARX-06, we look forward to facing off against other premium automotive brands from around the world – and continuing our winning ways.”

“HPD has 30 years of race-winning and championship-winning history,” said David Salters, HPD President and Technical Director. “Not only in endurance sports car racing, but in developing championship-winning Honda Civic-based racing cars, the powertrain for the Baja Ridgeline race truck, Formula Regional Americas and Formula 4 powertrains with the Type R engine, and of course the Indy 500 and the IndyCar Series.

“We are HPD. We race, we develop our engineers and technology through racing. We have an amazing and unique racing legacy, both past and present. It’s what we do as Acura’s – and Honda’s – North American racing organization. We are looking forward to the challenge of racing Porsche, BMW and GM in IMSA’s pinnacle GTP championship. We are very cognizant this is a big step for us. We have a lot to learn, but that is why race.”

“The new Acura ARX-06 has elements of our Indy-winning technology, Honda Formula One technology and Rolex 24-winning technology in it. This was achieved using HPD’s world-class simulation, design, development and manufacturing technologies; that our own engineers have developed, tested and validated. We are very proud of that. Now the challenge and hard work really starts, including grueling 24 hour simulations, and learning how to maximize all aspects of performance.”

At 2.4 liters, this is the smallest displacement ICE conceived by HPD for endurance racing, yet still meets the performance target of 500 kW as measured at the rear axle by torque meters. It features a 90-degree V-angle to reduce its center of gravity and polar moment of inertia. In addition, the combustion chamber has been designed to run on sustainable low-carbon fuel.

The hybrid power plant includes an IMSA-specified electric Bosch Motor Generator Unit (MGU) and Williams Advanced Engineering battery pack. The MGU is contained in a common transmission casing and gearbox internals provided by Xtrac. The battery, within the chassis survival cell, is built by Williams Advanced Engineering. The HPD Electrical Group completed both hardware and software development to best match the spec MGU and battery pack to the Acura ICE.

“We’ve taken the challenge presented by this new rule package from IMSA, and developed what we believe is a very competitive solution,” said Pierre Descamps, who led HPD’s powertrain design team for the ARX-06. “We’ve gone in a new direction for HPD in the design of the ICE. It is still a V6, which of course for Honda is well-known, but we have incorporated several new elements which we believe will make best use of the electric MGU and battery pack. Our new engine will rev to the maximum 10,000 rpm set by the rules, so it also makes a wonderful sound!”

Both IMSA in North America and FIA World Endurance Championship rules require manufacturers to use one of four approved prototype chassis, fitted with IMSA-homologated, manufacturer-designed and branded bodywork and engines.

In the case of the ARX-06, HPD and Acura have elected to continue their successful relationship with ORECA [ORganisation Exploitation Compétition Automobiles]. Since moving into chassis design and construction in 2007, ORECA has produced a series of winning sports prototypes, including the Acura ARX-05.

“We’re extremely pleased with our relationship with ORECA,” said Mark Crawford, HPD Large Project Leader for the ARX-06. They’ve been great partners throughout both our ARX-05 DPi program and now with the ARX-06. The GTP [Grand Touring Prototype] project has brought with it a new set of challenges and, while you certainly can see the Acura ‘family resemblance’ to our previous collaboration, the ARX-06 is an entirely new design.”

Salters praised the ORECA-HPD relationship during the development process.

“I would like to note the stand-out collaboration between the ORECA and HPD engineering groups. Working with the extremely talented ORECA engineers on chassis and aero design and powertrain installation has been a real pleasure. Both groups have put their heart and soul into this intense project and sophisticated race car”

Exterior styling of the Acura ARX-06 was led by the Acura Design Studio in Los Angeles, California, in conjunction with HPD and chassis-supplier ORECA, one of the chassis suppliers approved for prototype competition in both the IMSA WeatherTech SportsCar Championship and the World Endurance Championship.

HPD’s aerodynamics engineers and in-house CFD aero engineers worked with the Acura styling studio and chassis builder ORECA to help develop the styling and maximize the aerodynamic performance envelope of the ARX-06, while keeping it within the homologation boxes as specified by IMSA and the FIA.

“The process we used in creating the exterior design for the Acura ARX-06 is exactly the same as how we create a new Acura passenger vehicle,”

“As part of our Precision Crafted Performance Brand Promise, we treated it as an integral part of our lineup. The same world-class stylists that lead Acura production car design created initial sketches, then pared those down to several potential designs. Next, we created a scale model, did aero and wind tunnel model testing, and brought HPD and our partner teams in for their feedback,” Marek recounted. “The design continued to be refined throughout the testing and evaluation process, until we came up with a final treatment that met our performance goals while maintaining all-important Acura styling cues. It’s been an exciting process.”

Driver and team input was also sought throughout the design process. One effective change was a revision to the placement of the rearview mirrors – a seemingly minor adjustment that in fact has a large effect on vehicle aerodynamics. Using VR headsets, the drivers were able to sit in the car virtually and recommend a much lower placement for the side mirrors, improving both the aero efficiency of the ARX-06 and visibility for the drivers.

In addition to sweeping all three major IMSA prototype titles in both 2019 and 2020 – for Manufacturers’, Drivers’ and Teams – Acura has won the Rolex 24 at Daytona in both 2021 and ’22, including a 1-2 finish for the manufacturer at this year’s twice-around-the-clock endurance classic. Additional podiums at Sebring, Watkins Glen and the Petit Le Mans in 2021 resulted in a sweep of IMSA Michelin Endurance Cup titles for Acura and partner Wayne Taylor Racing.

This season, Wayne Taylor Racing has recorded four wins and a second to rank lead the IMSA Drivers’ and Teams’ championships heading into the final race of the season at Road Atlanta in October. Meanwhile, Meyer Shank Racing started off 2022 with a second consecutive Acura victory in the Rolex 24 at Daytona and five second-place finishes in eight races to rank second in both the drivers’ and teams’ standings.

These results have unofficially clinched the 2022 IMSA Manufacturers’ Championship for Acura; while the Drivers’ and Teams’ titles will go to either Meyer Shank Racing or Wayne Taylor Racing.

“We started with the rule book, a challenging spirit and an open mind,” said Salters. “Then our engineers got to work, utilizing all of the vehicle performance, powertrain simulation and development tools we have at HPD to address the critical areas for performance, including weight, power, packaging, center of gravity, etc.”

Here is a timeline of the development process for the Acura ARX-06: