Apple’s M1 chip has the fastest integrated graphics in a personal computer. 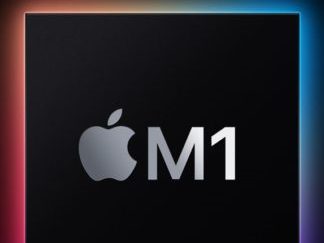 Apple’s M1 chip has the fastest integrated graphics in a personal computer.

Apple on Nov 10, 2020 announced the ARM based M1 soc (system on chip) at the “One more thing” event just like the A14 bionic powering the iPhones. These chips are specifically designed by Apple for MacBook Air, MacBook Pro and Mac Mini.

Apple claims these new chips will deliver incredible performance and power efficiency. Apple had designed this chip to work with their operating system macOSBig Sur.

It is also the first chip built using the 5 nanometer process with 16 billion transistors. The nanometer size refers to the line width between transistors on a chip. The smaller the number, the more cutting-edge and powerful are the chips, and thus more challenging to develop and produce.

Apple previously had changed the processors for its systems back in 2005, when Apple CEO Steve Jobs made the announcement to move away from PowerPC microprocessors supplied by Freescale (formerly Motorola) and IBM. The move to design M1 chip is quite significant as Apple is moving away from x86 architecture. ARM is a RISC (Reduced Instruction Set Computing) architecture while x86 is a CISC (Complex Instruction Set Computing) one.

Most of gaming and create work requires discreate graphics card or dedicated graphics card. Apple’s M1 chip has powerful graphics capability integrated. Apple claims Its integrated graphics bring the best of both worlds — a huge increase in graphics performance together with low power consumption. The GPU in M1 is the most advanced graphics processor Apple has ever built. With up to eight GPU cores, M1 is capable of executing nearly 25,000 threads at a time. From teraflops to texture bandwidth to fill rate to power efficiency.

M1 chip has Apple’s latest neural engine. The 16-core design can execute a massive 11 trillion operations per second. In fact, with a powerful 8‑core GPU, machine learning accelerators, and the Neural Engine, the entire M1 chip is designed to excel at machine learning. Final Cut Pro can intelligently frame a clip in a fraction of the time. Pixelmator Pro can magically increase sharpness and detail at incredible speeds. And every app with ML‑powered features benefits from performance never seen on Mac.

Apple’s new Universal platform will enable existing apps and new apps will support both Intel‑based and Apple silicon–based Mac systems. With the introduction of Rosetta 2, M1 and macOS Big Sur seamlessly run apps that haven’t yet transitioned to Universal versions. So, without updating, you can keep working on Fusion360 projects or reach the next level in your favorite game. And thanks to Metal and M1, some of the most graphically demanding apps perform better under Rosetta 2 than they did running natively on previous Mac systems with integrated graphics. Also, now users can run iPhone and iPad apps directly on a Mac.