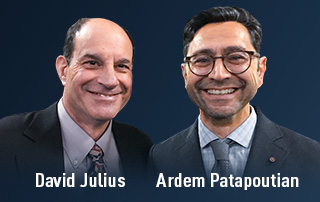 Discovering how we feel sense and touch wins 2021 Nobel Prize in Medicine. The Nobel Prize in Physiology or Medicine for 2021 was awarded to some moving research. The prize was presented on October 4 to David Julius of the University of California, San Francisco, and Ardem Patapoutian of the Scripps Research Institute in La Jolla, Calif., for their work identifying sensors on nerve cells that perceive heat, cold, and pressure. The Nobel Prize in Medicine for 2021 will be awarded for discovering how we perceive temperature and touch.

Our ability to detect heat, cold, and touch is critical for life and supports how we interact with the world. We take these sensations for granted in our daily lives, but how do nerve impulses originate from temperature and pressure perception? The Nobel Laureates for this year have answered this question.

David Julius used capsaicin, a strong substance found in chili peppers that causes a burning sensation, to find a heat-sensitive sensor in the skin’s nerve endings. Ardem Patapoutian discovered a new class of sensors that respond to mechanical stimuli in the skin and interior organs using pressure-sensitive cells. These groundbreaking discoveries sparked a flurry of research, resulting in a rapid improvement in our understanding of how our nervous system perceives heat, cold, and mechanical stimuli. The laureates discovered important gaps in our knowledge of the complicated interplay between our senses and our surroundings.

How we feel sense and touch wins 2021 Nobel Prize in Medicine.

How do we perceive the world?

The subject of how we perceive our surroundings is one of humanity’s major mysteries. For thousands of years, the mechanisms that underpin our senses have piqued our interest, such as how light is recognized by our eyes, how sound waves affect our inner ears, and how different chemical compounds interact with receptors in our nose and mouth to produce smell and taste. Other methods of perceiving the world around us exist as well. Consider strolling across a yard barefoot on a hot summer day.

The sun’s heat, the breeze’s caress, and the individual blades of grass beneath your feet can all be felt. Temperature, touch, and movement perceptions are critical for human adaptation to a continuously changing environment. René Descartes, a 17th-century philosopher, imagined threads linking various sections of the skin to the brain. A foot touching an open flame would convey a mechanical signal to the brain in this way. The existence of specific sensory neurons that register changes in our surroundings was later discovered. In 1944, Joseph Erlanger and Herbert Gasser were awarded the Nobel Prize in Physiology or Medicine for discovering different types of sensory nerve fibers that respond to diverse stimuli, such as painful and non-painful touch responses. Since then, it has been established that nerve cells are highly specialized for detecting and transducing many types of stimuli, allowing us to have a more nuanced experience of our surroundings; for example, our ability to distinguish between agreeable and painful warmth through our fingertips.

Prior to the discoveries of David Julius and Ardem Patapoutian, we had a basic unresolved puzzle about how the nervous system receives and interprets our environment: how are temperature and mechanical inputs translated into electrical impulses in the nervous system. David Julius of the University of California, San Francisco, USA, identified the potential for huge breakthroughs by studying how the chemical compound capsaicin creates the burning sensation we experience when we come into contact with chili peppers in the late 1990s. Capsaicin was already known to activate nerve cells, creating pain feelings, but exactly how this chemical did so remained a mystery. Julius and his colleagues constructed a database of millions of DNA fragments belonging to genes expressed in sensory neurons that respond to pain, heat, and touch.

Julius and colleagues expected that the library would contain a DNA fragment encoding a capsaicin-reactive protein. Individual genes from this collection were expressed in cultivated cells that do not ordinarily react to capsaicin. After a long search, a single gene was discovered that may make cells sensitive to capsaicin. The capsaicin-sensing gene had been discovered! Further research found that the identified gene encoded a unique ion channel protein, which was dubbed TRPV1 after the newly discovered capsaicin receptor. Julius uncovered a heat-sensing receptor that is activated at temperatures that are uncomfortable when he looked into the protein’s ability to respond to heat.

TRPV1’s discovery was a watershed moment in the study of temperature-sensing receptors, paving the path for the discovery of more. David Julius and Ardem Patapoutian, working independently, used the chemical compound menthol to find TRPM8, a receptor that has been demonstrated to be activated by cold. Additional TRPV1 and TRPM8-related ion channels were discovered to be activated by a wide range of temperatures. Using genetically altered mice that lacked these newly found genes, many laboratories pursued research programs to study the roles of these channels in temperature sensation.

While the processes for temperature feeling were being discovered, it was still unclear how mechanical impulses could be transformed into our tactile and pressure perceptions. Mechanical sensors had previously been discovered in bacteria, but the processes that underpin touch in vertebrates were unclear. Ardem Patapoutian, a researcher at Scripps Research in La Jolla, California, wanted to find out which receptors are triggered by mechanical stimuli. When individual cells were prodded with a micropipette, Patapoutian and his coworkers discovered a cell line that gave off a quantifiable electric signal. The receptor activated by mechanical force was considered to be an ion channel, and 72 candidate genes encoding potential receptors were discovered as a further step. To find the gene responsible for mechanosensitivity in the cells tested, these genes were inactivated one by one. Patapoutian and his colleagues identified a single gene whose silencing rendered the cells insensitive to poking with the micropipette after a long search.

Piezo1, a new and previously unknown mechanosensitive ion channel, was identified and named after the Greek word for pressure (í; píesi). A second gene, termed Piezo2, was discovered due to its similarities to Piezo1. Piezo2 was found to be overexpressed in sensory neurons, and later research confirmed that Piezo1 and Piezo2 are ion channels that are triggered directly by the application of pressure to cell membranes. Patapoutian’s revelation sparked a flurry of studies from his and other organizations revealing that the Piezo2 ion channel is critical for touch perception. Furthermore, Piezo2 has been demonstrated to play a fundamental part in the crucial sense of body position and motion known as proprioception. Piezo1 and Piezo2 channels have also been demonstrated to govern other essential physiological processes such as blood pressure, respiration, and urine bladder control in subsequent studies.

This year’s Nobel Laureates’ significant discoveries of the TRPV1, TRPM8, and Piezo channels have allowed us to better grasp how heat, cold, and mechanical force can trigger nerve impulses that allow us to detect and adapt to the environment around us. Our capacity to detect temperature is largely dependent on TRP channels. The Piezo2 channel gives us the ability to feel touch as well as the location and movement of our body parts.

TRP and Piezo channels also play a role in a variety of other physiological functions that rely on temperature or mechanical stimuli for detection. Intensive ongoing research centered on clarifying their functions in a number of physiological processes stemming from this year’s Nobel Prize-winning findings. This understanding is being applied to the development of medicines for a variety of diseases, including chronic pain.