EVWeek in Canada Delivers Investments for Decarbonizing Transportation Across Canada 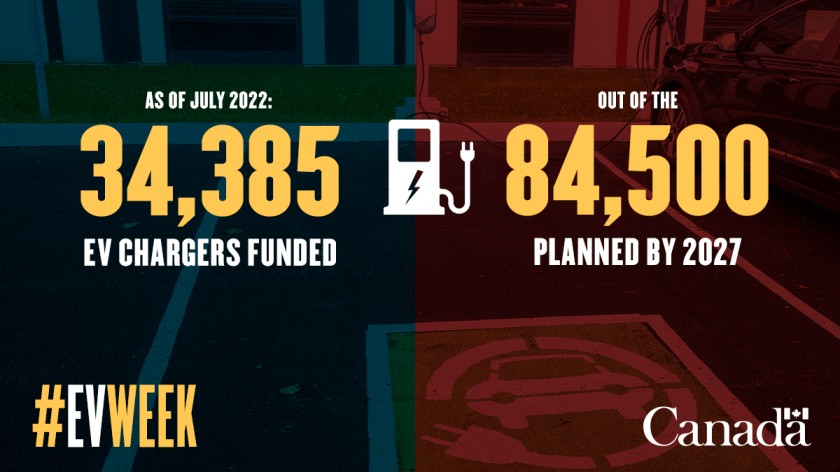 EVWeek in Canada Delivers Investments for Decarbonizing Transportation Across Canada.

PARADISE, NL, July 15, 2022 – From coast to coast to coast, Canadians are actively contributing toward Canada’s fight against climate change in many ways. Given that transportation accounts for 25 percent of emissions, this contribution includes making the switch to pollution-free electrified transportation. Across the country, the Government of Canada is supporting Canadians by making it easier for families and businesses to purchase, charge and use electric vehicles (EVs) while driving toward a net-zero future.

During #EVWeek, from July 11 to 15, the Government of Canada announced new developments in charging infrastructure, battery manufacturing, purchase incentives and zero-emissions buses.

Thousands of new cars require thousands of new chargers, which are critical for enabling energy security and clean air. Since 2015, Canada has invested a historic $1 billion to make EVs more affordable and chargers more accessible. These investments are supporting the establishment of a nationwide network of chargers in where Canadians live, work and play, while federal rebates of up to $5,000 are helping more Canadians make the switch to an EV.

During #EVWeek alone, the Government of Canada announced the deployment of over 6,000 electric vehicle (EV) chargers across the country, supported by a total investment of over $45 million.

Federal representatives also participated in two milestone events with the Ivy Charging Network and takeCHARGE, representing a total investment of over $9 million to install 198 EV chargers in Ontario, and in Newfoundland and Labrador.

On July 13, Prime Minister Justin Trudeau joined Minister François-Philippe Champagne in announcing Umicore’s plans to invest $1.5 billion in Canada to establish an electric vehicle battery component production net-zero facility, in Loyalist Township, Ontario. This project will create a thousand jobs during construction and hundreds of long-term positions once the plant is up and running. Made-in-Canada battery materials are an essential part of ensuring North American energy and mineral security while creating jobs, supporting Canada’s auto and manufacturing sector, and keeping air clean.

In order to help businesses and communities make the switch to zero-emissions transportation, the Government of Canada announced the new iMHZEV Program. Medium- and heavy-duty vehicles contribute to nearly 10 percent of Canada’s emissions.The Government of Canada is providing nearly $550 million over four years to support eligible recipients in purchasing or leasing medium- and heavy-duty zero-emission vehicles (ZEVs). This program builds on the success of the Incentives for Zero-Emission Vehicles Program, which has already helped Canadians purchase or lease over 141,000 new light-duty zero-emission vehicles since 2019.

Budget 2022 invested in ZEV deployment, including by providing an additional $1.7 billion to extend the government’s purchase incentive program until March 2025 and to expand the types of vehicle models eligible under the program, which would include more vans, trucks and SUVs, in support of the government’s objective of adding 50,000 zero-emission vehicle (ZEV) chargers to Canada’s network.

Leading up to #EVWeek, the Government of Canada announced a $253,000 investment to support the transition to low-emission transit for the cities of Brampton and Burlington, in partnership with the Canadian Urban Transit Research and Innovation Consortium, through the Federation of Canadian Municipalities’ Green Municipal Fund. Earlier today, funding was announced to support the electrification of public transit in St. Catharines and Thorold, Ontario — reducing greenhouse gas emissions by 95 percent while enhancing air quality. Projects such as these are helping to build stronger, healthier communities for everyone to call home.

As part of the transition to net-zero by 2050, Infrastructure Canada and the Canada Infrastructure Bank are supporting the decarbonization of public transit and school buses. The Government of Canada is on track to surpass the 2019 commitment supporting the procurement of over 5,000 zero-emissions buses, including nearly 4,000 school buses in B.C., Quebec and P.E.I. and over 1,200 public transit buses in 10 cities from coast to coast. These electric and hydrogen fuel-cell buses will be deployed on the road over approximately the next five years.

These investments are yet another step in reaching Canada’s target of ensuring that all new passenger vehicles sold in Canada are zero-emission by 2035. And just like investments in everything from clean technology to nature protection, the #EVWeek announcements are part of achieving Canada’s ambitious climate change goals to build a cleaner, healthier and affordable future for all Canadians.

“Happy EV Week, Canada. Our government is making electric vehicles more affordable and charging more accessible where Canadians live, work and play. Investing in more EV chargers across the country will put more Canadians in the driver’s seat on the road to a net-zero future and help achieve our climate goals.”

“The transportation sector is Canada’s second-biggest source of emissions fuelling climate change, and one of the fastest growing. Zero-emission passenger vehicles are road-ready technology, and more and more Canadians want to buy them. EVs will make our air cleaner while offering Canadian households big savings on fuel and maintenance. It’s the smart consumer choice for a cleaner environment.”

The Honourable Steven Guilbeault Minister of Environment and Climate Change

“The future of our transportation sector is green — and our government’s announcements this #EVweek show how we’re making it easier for Canadians to move toward this goal. As we build a network of EV chargers from coast to coast to coast, and make the switch to an electric vehicle more affordable across the country, we’re moving closer to making a net-zero future a reality.”

“By leveraging the power of clean energy and transitioning to a cleaner economy, we can ensure a stronger, healthier future for everyone. This EV week, our government shared that we are on track to surpass our 2019 commitment to put 5,000 zero-emissions buses on Canadian roads, bringing us another step closer to achieving our climate goals and delivering affordable and sustainable transportation to Canadians.”