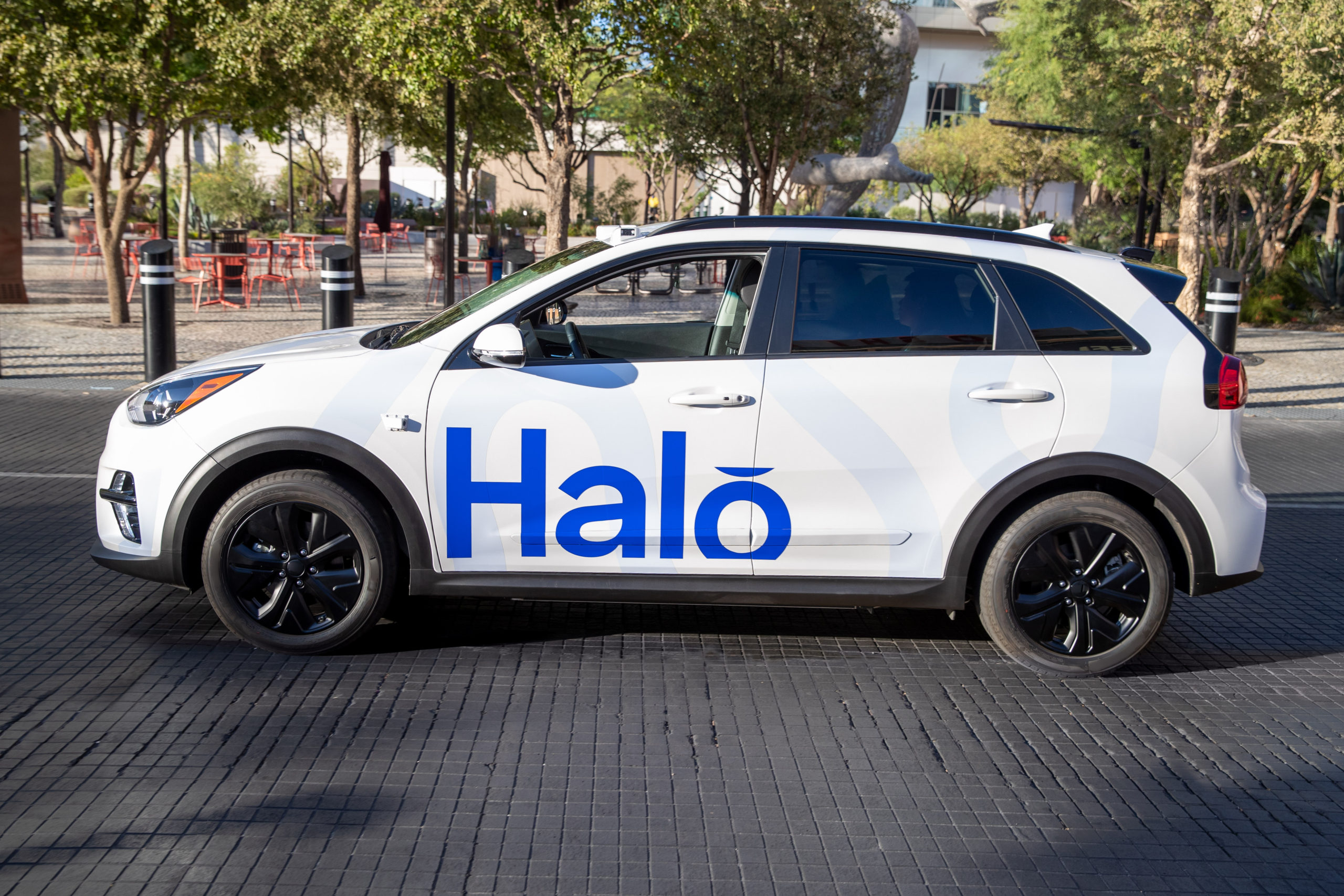 Autonomous vehicles have long been science fiction, and there are reasons why we haven’t yet arrived at a transportation nirvana in which our cities hum along without traffic congestion or pollution. According to many experts, driverless and autonomous cars pose exceedingly difficult technical hurdles that will not be overcome anytime soon. There’s also the issue of social trust: no matter how smart a car is, if people won’t get in, it’s useless. However, both of these challenges – technological advancement and societal change – are marching in lockstep toward more capable driverless and autonomous vehicles. Today, thanks to 5G networks, we are witnessing remarkable progress.

Step 1 – Request a car for your specific dates and times.

Step 2 – A driverless Halo will arrive to you. It’s yours to keep and drive for the duration of the booking.

Step 3 – Drop yourself off, end the trip, and the Halo will return itself driverless back to Halo garage.

Cruise, Waymo, Uber, Tesla, and other companies have all been driving the sector forward. Even Domino’s has gotten into autonomous vehicles, with Nuro, an occupant less on-road delivery vehicle that was approved by the US Department of Transportation in April. Now, there’s a new newcomer on the market called Halo, a firm that’s using an autonomous electric vehicle (EV) that operates on 5G technology to handle transportation difficulties in a creative and pragmatic way. Halo has launched one of the first commercial driverless car services in the United States, and it’s powered by T-5G Mobile’s network in Las Vegas, which is known for its rapid adoption of cutting-edge technology, from the first hyperloop test to the city’s newest underground tunnel. Halo is now contributing to the city’s list of technical accomplishments.

The Halo service is secure and simple to use. Riders will just use a mobile app to hail a self-driving EV. When a driverless Halo arrives at the pick-up site, the passenger climbs on and is whisked away to their destination. There is no need to park when you arrive because the Halo will drive itself to the next pick-up site.

Halo trains in-house remote drivers to operate the driverless automobile through T-5G Mobile’s network using its proprietary RemotePilot technology. If a potential safety threat or system abnormality is recognised, Halo has created an Advanced Safe Stop technology that allows its cars to come to a complete stop. While humans operate the vehicle, the automobile learns in the background using a powerful Artificial Intelligence (AI) algorithm, creating a unique feedback loop to attain Level 3 skills over time.

According to Anand Nandakumar, Halo’s Founder and CEO, his service is unique in that it builds automation over time, starting with a solution that consumers would feel comfortable using right now. Industrial robotics served as a source of inspiration for Halo, he said. Previously, entire factory floors were crammed with people touching every component of a product as it was being created. However, robotics has been used to automate redundant activities over time, and many warehouses around the country are now nearly totally automated with human supervision. Halo takes a similar approach to autonomy.

Over a 5G connection, humans finish drives, delivering real-world data for an AI system to learn and improve in the background. As a result, certain tasks will be automated over time, while local occupations will be created where people would work alongside AI and robotics.

Halo’s long-term goal is to work with local governments to cover cities in Halos and connect public transportation networks. Public transportation, according to the American Public Transportation Association, provides a lifeline for millions of Americans. However, for many people, the difficulty of last-mile transit is a deterrent to use trains and buses. How to get riders from the bus or train station to their final destination is known as the “last mile problem”

According to Justin Jones, Clark County Commissioner of District F and Vice Chair of the Southern Nevada Regional Transportation Commission City Official, Halo and 5G technology provide an intelligent transition between where the city is now and where it wants to go in the future, providing residents and visitors with a better, more energy efficient way to get around the city.

5G is transforming numerous industries today, including transportation. Similar to how smartphone apps built on 4G networks transformed the mobile economy in ways no one could have expected, 5G will do the same, but at a much larger scale across all industries. It is inventors, developers, and entrepreneurs like Halo who are bringing the magic to life, and it is because of this type of startup innovation that T-Mobile is working to construct the country’s largest and greatest 5G network.

Also Read: Spin’s 3-wheeled e-scooter that can park itself.