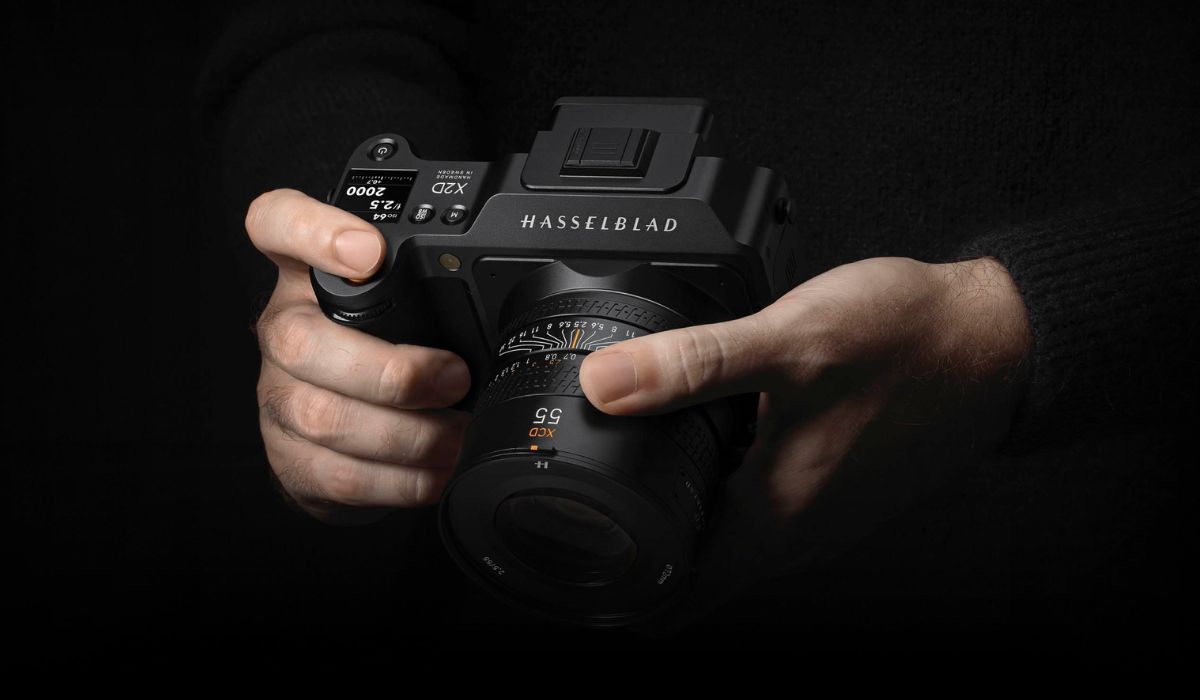 Third medium format mirrorless camera system from Hasselblad, the X2D, has been announced. Along with three brand-new F2.5 prime lenses. The Hasselblad X2D 100C’s main component is a 100MP backside-illuminated CMOS sensor (43.8mm x 32.9mm), which the company claims has a 16-bit color depth and up to 15 stops of dynamic range. A 5-axis in-body image stabilization (IBIS) system, which according to Hasselblad delivers up to seven stops of adjustment, stabilizes that sensor.

294 Phase Detection Autofocus (PDAF) zones are used by the upgraded autofocus mechanism to locate and lock onto subjects. Photos can be saved on a CFexpress Type B card or the camera’s 1TB internal SSD storage in JPEG or 3FR Raw formats.

A 0.5″ OLED electronic viewfinder (EVF) with a resolution of 5.76M dots, 1x magnification, and a 60fps refresh rate is among the additional features. A 3.6″ 2.36MP tilting touchscreen display on the back of the camera acts as the primary interface for the camera’s Hasselblad User Interface. There is also a 1.08″ top display for displaying the current camera settings (HUI).

420 shots are claimed to be the CIPA rating for the detachable battery by Hasselblad, although in practice, most users get far more than that. However, if your battery runs out, the built-in PD 3.0 rapid charging should enable you to resume shooting right away without the use of a separate charger.

Hasselblad introduces the potent X2D 100C together with three new lenses to the XCD family, the XCD 2,5/38V, XCD 2,5/55V, and the XCD 2,5/90V, giving the ultimate experience for video creators following the groundbreaking success of the X1D-50c and its second version, the X1D II 50C. Hasselblad X2D 100C: Every Detail Is Inspiration The X2D 100C, a medium format mirrorless digital camera from Hasselblad, has been designed to offer significant technological improvements in image quality, camera handling, and system responsiveness.

The X2D 100C features a 100-megapixel back-side illuminated (BSI) (43.8 32.9 mm) CMOS sensor with up to 15 stops of dynamic range and 16 bits of color depth. It is housed in a new dark grey tone machined aluminium housing. A previously unthinkable level of creativity is now possible thanks to the X2D 100C. It enables content producers to use the Hasselblad Natural Color Solution to capture the subtleties of an image’s highlights and shadows (HNCS). Handheld image capture is feasible in the broadest variety of circumstances because to the new 5-axis, 7-stop in-body image stabilization technology (IBIS). For the X2D 100C, Hasselblad independently created its own IBIS in order to satisfy the strict specifications for stabilizing a 100MP sensor.

The technology guarantees that the topic is quickly detected and brought into focus thanks to its 294 PDAF zones. The cutting-edge, integrated 1TB SSD storage and CFexpress Type B card support of the X2D 100C deliver a rapid capture rate for quickly moving subjects. It also captures files in 3FR RAW and full-size JPEG.

The X2D 100C has a 0.5-inch OLED Electronic Viewfinder (EVF) that offers electric refractive error correction to make sure the entire display is clear and brilliant from corner to corner. It has a high magnification of 1.00x and a refresh rate of 60fps. 2 Access to all of these new imaging technologies is provided through a 1.08-inch color top display and a 2.36MP, 3.6-inch tilting, touch-capable rear display, but the X System’s logical Hasselblad User Interface (HUI) and Scandinavian design remain. The battery supports PD 3.0 rapid charging and has a CIPA certification of 420 shots. 3 Additionally, Phocus, a free image editing program from Hasselblad, works with the X2D 100C.

“When developing the X2D 100C, our goal was the same as always, just as Victor Hasselblad himself made decades ago: build a better camera,” said Bronius Rudnickas, Hasselblad Marketing Manager. “This commitment drives us to explore the possibility to improve its performance from all aspects.”