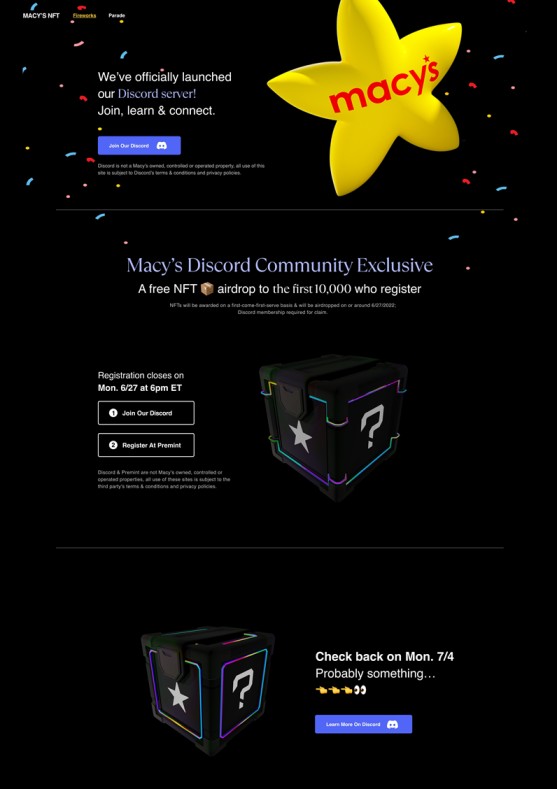 NEW YORK, June 20, 2022 – As the nation gathers to celebrate Independence Day with friends and family, Macy’s 4th of July Fireworks®, the nation’s largest party will take the revelry to the Web3 frontier. Beginning today, Macy’s (NYSE: M) will launch a new series of free NFTs (Non-Fungible Tokens) celebrating the brand’s iconic pyrotechnic event. In preparation for the new NFT drop, Macy’s will launch its Discord channel, adding to the company’s roster of social platforms where the brand engages with fans and customers.

“As we commemorate our Independence Day with the nation’s largest pyrotechnic celebration, Macy’s wanted to take the fun into the Web3 frontier bringing the revelry to a digital landscape,” said Will Coss, executive producer of Macy’s 4th of July Fireworks. “These free Macy’s Fireworks NFTs will help attract a new set of fans with an easy to access implementation that democratizes this emerging space for a mass audience, while also embracing a digitally native audience with added utilities including Augmented Reality wearables.”

Available today on a first come, first serve basis, to collect the NFTs fans must first register via the newly launched Macy’s Discord channel available at Discord: Macy’s Server. This set of 10,000 Macy’s Fireworks NFTs will be available in Classic, Rare and Ultra Rare designs and will showcase graphic elements from this year’s Macy’s 4th of July Fireworks celebration. The NFTs will come with added utility including the ability to access Augmented Reality wearables that can be used on a selection of social media and video communications platforms.

The Macy’s Fireworks NFTs are built atop the Polygon blockchain, selected by Macy’s for their commitment and intent to advance eco-friendly solutions within the Web3/NFT landscape.

More surprises are in store in the coming weeks for NFT collectors and Macy’s Fireworks fans and all are encouraged to visit macys.com/NFT or Macy’s Discord to stay up-to-date on the latest news.

Macy’s signature jaw dropping pyrotechnic salute to America featuring a 25-minute barrage of more than 48,000 dazzling shells and effects will captivate spectators live in New York City and on television. Spectators from coast-to-coast will have a front row view of the pyro in the sky by tuning to NBC’s national broadcast of Macy’s 4th of July Fireworks Spectacular on Monday, July 4 (8-10 p.m. ET/PT, 7-9 p.m. CT/MT, check local listings or stream the show on Peacock®). The nation’s No. 1 Independence Day special will also feature performances from some of music’s brightest stars.