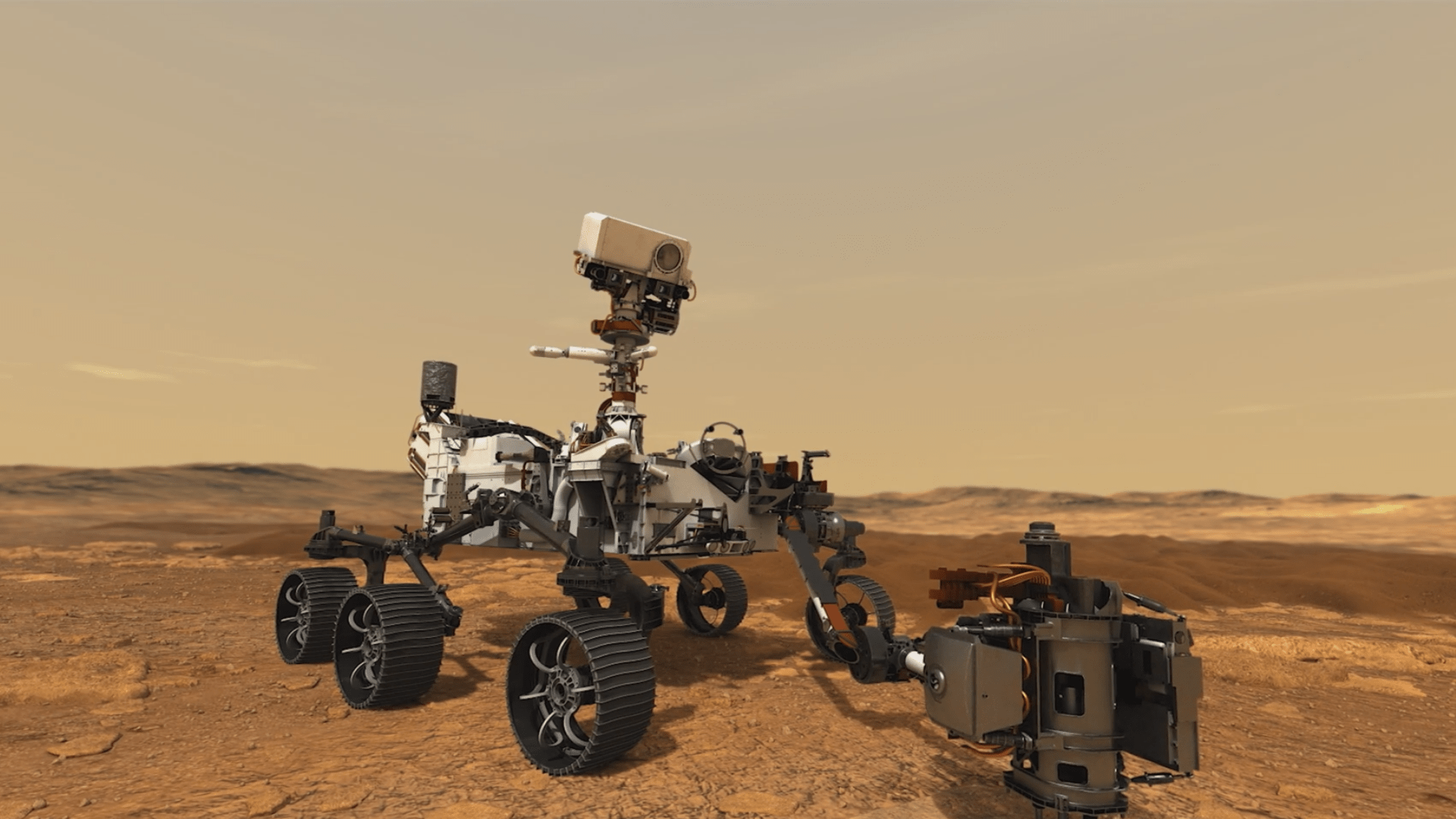 NASA’s Ingenuity Mars Helicopter will be the first to fly on another planet.  Perseverance rover will land on Mars on Thursday, Feb. 18, 3:55 p.m. EST.

Perseverance was launched last year July 30, 2020, to search for signs of microbial life, collect rock and dust samples and will return to Earth, characterize Mars geology and climate, and will help in future exploration of the red planet. Perseverance is NASA’s fifth Mars rover and it will be its ninth Mars landing, if successful. Live commentary will be available on the NASA website, NASA app, and Youtube.

Ingenuity Chief Engineer Bob Balaram says, “The Ingenuity Helicopter, we are a technology demonstration on the Mars Perseverance Mission. In other words, we are hitching a ride to Mars with the Rover. We will be dropped off on Mars. And what we will be doing is for the very first time we will be exploring the aerial dimension of mobility on another planet. So this small helicopter will make a succession of small test flights, and then the results from that will inform the possible design and use of additional helicopters in the future for Mars for exploration and for science. So, we’re really a small little payload. We are about four pounds. We have a wingspan from tip to tip for our rotors which is about 1.2 meters.

That’s again, about four feet and these flights will be in the order of about a minute or a minute and a half. And we’ll be executing potentially up to five flights over a course of 30 Martian days, otherwise known as Martian sols. And that is the plan, and we are currently en route to Mars with Perseverance. We are tucked up under the belly, and within about a month or two after Perseverance lands and does all its checkout, we will be deployed onto our little landing airfield, if you will. And then we will commence our experiments for this technology demonstration”

The Ingenuity Mars Helicopter is the first aircraft humanity has sent on another planet to attempt powered, controlled flight. As per NASA if the experiment succeeds, the data returned could benefit future explorations of the Red Planet – including those by astronauts – by adding the aerial dimension, which is not available today. While Ingenuity is a technology experiment that is separate from the rover’s science mission, the helicopter launched to Mars on July 30, 2020, attached to the belly of NASA’s Mars 2020 Perseverance rover. They will land together in Jezero Crater on Feb. 18, 2021.

7 Things to Know about Inguinity:

Ingenuity Mars Helicopter will be the first to fly on another planet. NASA’s Ingenuity Mars Helicopter is small but mighty. In a mere six years, it went from being an implausible prospect to a 4-pound (1.8-kg), a space-certified companion to Mars aboard the Perseverance rover. And when Ingenuity arrives at Mars, it will aim to push the limits of flight. Here are seven things you should know about Ingenuity

Also Read: TIGER Hyundai’s robot that can walk and drive

1. Ingenuity is an experimental flight test

Ingenuity is what is known as a technology demonstration – a project that seeks to test a new capability for the first time, with limited scope. Previous groundbreaking technology demonstrations include the Mars Pathfinder rover, Sojourner, and the Mars Cube One (MarCO) CubeSats that flew by Mars in 2018. The helicopter does not carry science instruments and is a ride-along on the Mars 2020 Perseverance mission. Ingenuity’s objective is an engineering one: to demonstrate rotorcraft flight in the extremely thin atmosphere of Mars.

2. Ingenuity will attempt the first powered, controlled flight on another planet – a feat with a high degree of difficulty.

Mars has beyond bone-chilling temperatures, with nights as cold as minus 130 degrees Fahrenheit (minus 90 degrees Celsius) at Jezero Crater. These temperatures will push the original design limits of the off-the-shelf parts used in Ingenuity. Tests on Earth at the predicted temperatures indicate they should work as designed, but the team is looking forward to the real test at Mars. One of Ingenuity’s first objectives, when it gets to the Red Planet, is just to survive the frigid Martian night for the first time.

Mars has a rarefied atmosphere – just about 1% of the density of our atmosphere on Earth. Because the Mars atmosphere is so much less dense, Ingenuity is designed to be light, with rotor blades that are much larger and spin much faster than what would be required for a helicopter of Ingenuity’s mass on Earth. Mars does give the helicopter a little help: The gravity there is only about one-third that of Earth’s. That means slightly more mass can be lifted at a given spin rate. Ingenuity will attempt up to five test flights within a 30-Martian-day (31-Earth-day) demonstration window. Its pioneering aspirations are similar to those of the Wright brothers’ Flyer, which achieved the first powered, controlled flight on Earth.

3. Ingenuity relies upon the Mars 2020 Perseverance spacecraft for safe passage to Mars and for operations on the Red Planet’s surface.

Ingenuity is nestled up sideways under the belly of the Perseverance rover, with a cover to protect it from the debris kicked up during landing. Both the rover and the helicopter are safely ensconced inside a clamshell-like entry capsule during the 293-million-mile (471-million kilometers) journey to Mars. The power system on the Mars 2020 spacecraft periodically charges Ingenuity’s batteries on the way there.

To reach the Martian surface, Ingenuity rides along on Perseverance’s entry, descent, and landing system, which features a supersonic parachute, new “brains” for avoiding hazards autonomously, and components for the maneuver known as the sky crane. Only about 50% of the attempts to land on Mars, by any space agency, have been successful.

Once a suitable site to deploy the helicopter is found, the rover’s Mars Helicopter Delivery System will shed the landing cover, rotate the helicopter to a legs-down configuration, and gently drop Ingenuity on the surface in the first few months after landing. Throughout the helicopter’s commissioning and flight test campaign, the rover will assist in communications back and forth from Earth. The rover team also plans to collect some images of Ingenuity.

4. Ingenuity is smart for a small robot.

Delays are an inherent part of communicating with spacecraft across interplanetary distances, which means the helicopter’s flight controllers at JPL won’t be able to control the helicopter with a joystick or to look at engineering data or images from each flight until well after the flight takes place. Therefore, Ingenuity will make some of its own decisions, based on parameters set by its engineers on Earth. Ingenuity has a kind of programmable thermostat, for instance, that will keep it warm on Mars. During the flight, Ingenuity will analyze sensor data and images of the terrain to ensure it stays on the flight path programmed by project engineers.

Ingenuity Mars Helicopter the first to fly on another planet. It took humankind centuries and a lot of trial and error to figure out how to fly planes and helicopters on Earth. In careful steps over six years, engineers on the Ingenuity team were able to demonstrate that it was possible to build something ultra-lightweight that could generate enough lift in Mars’ thin atmosphere to take off from the ground, and that could operate and survive autonomously in the challenging Martian environment. These accomplishments have already pushed the boundaries of flight. Ingenuity has now survived the dynamic environment around launch and proved it can charge its off-the-shelf batteries in space. Flying over the surface of Mars will confirm results from flight tests performed in special space simulation chambers and provide insights into operating a helicopter on Mars.

6. The Ingenuity team counts success one step at a time.

Given Ingenuity’s experimental nature, the team has a long list of milestones the helicopter must pass before it can take off and land in the spring of 2021. The team will celebrate each milestone: • Surviving the cruise to Mars and landing on the Red Planet • Safely deploying to the surface from the belly of the Perseverance rover • Autonomously keeping warm through the intensely cold Martian nights • Autonomously charging itself with its solar panel • Successfully communicating to and from the helicopter via a subsystem known as the Mars Helicopter Base Station on the rover If the first experimental flight test on another planet is successful, the Ingenuity team will attempt more test flights.

7. If Ingenuity succeeds, future Mars exploration could include an ambitious aerial dimension.

Ingenuity is intended to demonstrate the technologies needed for flying in the Martian atmosphere. If successful, these technologies could enable other advanced robotic flying vehicles that might be part of future robotic and human missions to Mars. Possible uses of a future helicopter on Mars include offering a unique viewpoint not provided by current orbiters high overhead, or by rovers and landers on the ground; high-definition images and reconnaissance for robots or humans; and access to terrain that is difficult for rovers to reach. A future helicopter could even help carry light but vital payloads from one site to another.