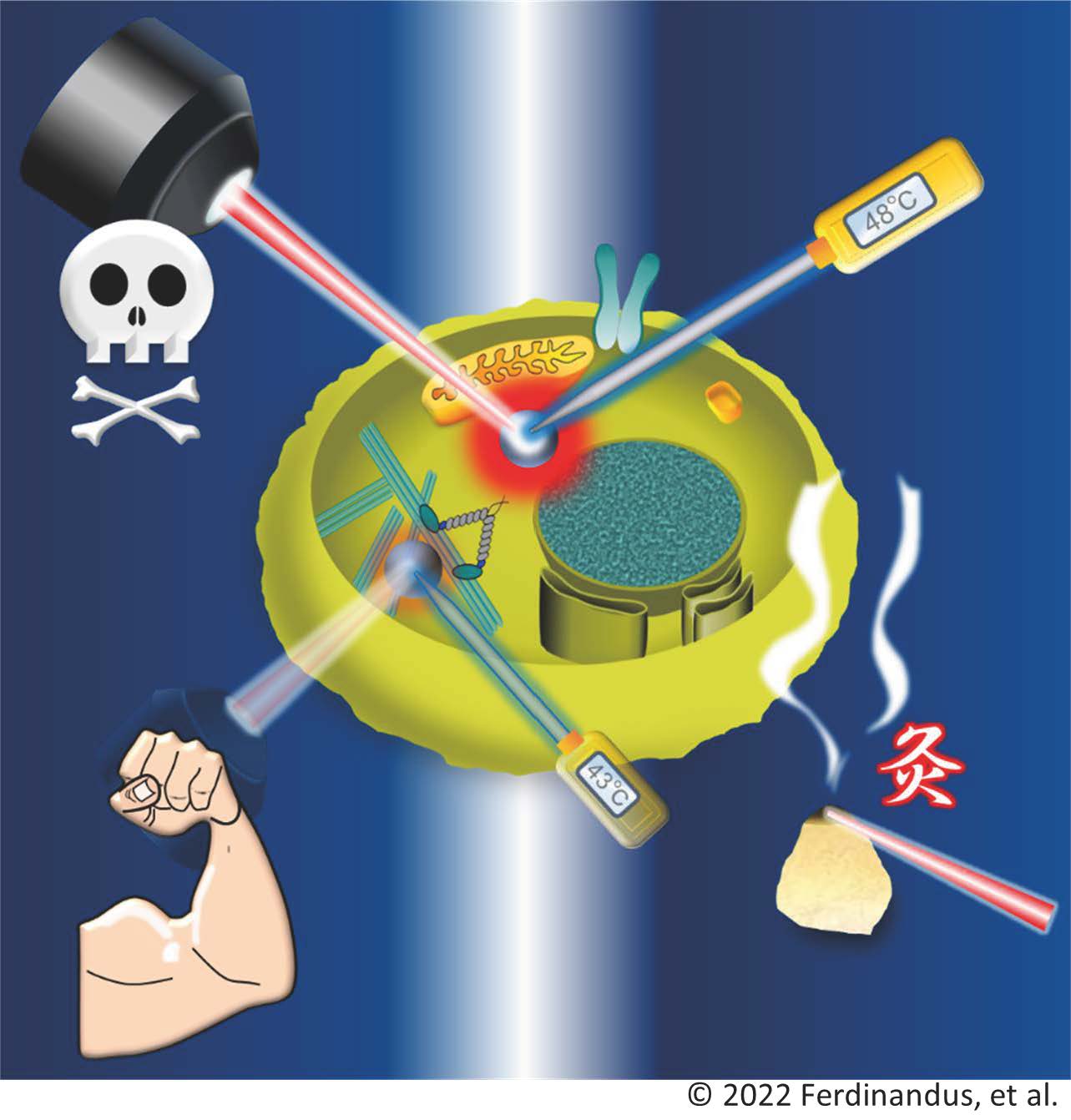 Researchers Develop Nanoparticle That Can Heat And Manipulate One Cell At A Time.

KANAZAWA, Japan, July 4, 2022 – Researchers at Kanazawa University report in ACS Nano the development of a nanoparticle that acts as a heater and a thermometer. Inserting the nanoparticle in living cells results in a heat spot that, by switching it on and off, enables the controlled modulation of local cellular activities.

Being able to heat nano-sized regions in biological tissues is key to several biomedical applications. Indeed, many biological processes are temperature-sensitive, and the ability to locally modify temperature provides a way to manipulate cellular activity. A notable purpose is the destruction of cancer cells by heating them. Beside the need for an in-tissue local heating mechanism, it also important to be able to instantaneously measure the generated temperature. Satoshi Arai from Kanazawa University and colleagues have now engineered a nanoparticle that is both a nanoheater and a nanothermometer at the same time. They successfully showed that the insertion of a single, controllable heat spot in tissue can be very effective in modifying cellular function.

The nanoparticle, called “nanoHT” by the scientists — an abbreviation of “nanoheater-thermometer” — is essentially a polymer matrix embedding a dye molecule (called EuDT) used for sensing temperature, and another dye molecule (called V-Nc) for releasing heat. The latter happens through the conversion of light into thermal energy (the photothermal effect, also exploited in solar cells): shining a near-infrared laser (with a wavelength of 808 nanometer) onto V-Nc results in fast heating, with a stronger increase in temperature for higher laser power.

Temperature sensing is based on the thermal fluorescence effect of EuDT. When irradiated with light of one wavelength, the molecule emits light at another wavelength — fluorescence. The higher the temperature, the less intense the fluorescence becomes. This inverse relationship can be used to measure temperature. Arai and colleagues tested the performance of nanoHT as a thermometer, and established that it can determine temperatures with a resolution of 0.8°C and less.

The researchers then performed experiments with a type of human cells called HeLa cells. They looked at the effect of heating through nanoHT, and found that at a temperature increment of about 11.4 °C, the heated HeLa cells died after only a few seconds. This finding suggests that nanoHT could be used to induce cell death in cancer cells.

Arai and colleagues also studied how nanoHT can be used to affect the behavior of muscles. They introduced the nanoparticle into myotube, a type of fiber present in muscle tissue. Upon heating the myotube by approximately 10.5 °C, the muscle tissue contracted. The procedure worked reversibly; letting the myotube cool again led to muscle relaxation.

The work of Arai and colleagues shows that local heating at a subcellular scale by means of nanoHT enables the controlled manipulation of a single cell’s activity. Regarding applications, the scientists believe that “the targeted application of nanoHT has a diverse and versatile range of capabilities to regulate cellular activities that would facilitate the development of thermodynamic cell engineering.”

Fluorescence refers to the emission of light by a substance after which it has absorbed light (or another type of electromagnetic radiation). Typically, the emitted light has a longer wavelength, and so a lower photon energy, than the absorbed radiation. A well-known case of fluorescence happens when the absorbed radiation is in the ultraviolet region of the spectrum, invisible to the human eye, while the emitted light is in the visible region.

Satoshi Arai from Kanazawa University and colleagues used fluorescence dye molecules to develop nanoHT, a nanoparticle acting as both a heater and a thermometer for nano-bio applications.

In DNA, scientists find solution to building superconductor that could transform technology