The James Webb Space Telescope is getting ready to be transported to its launch site. 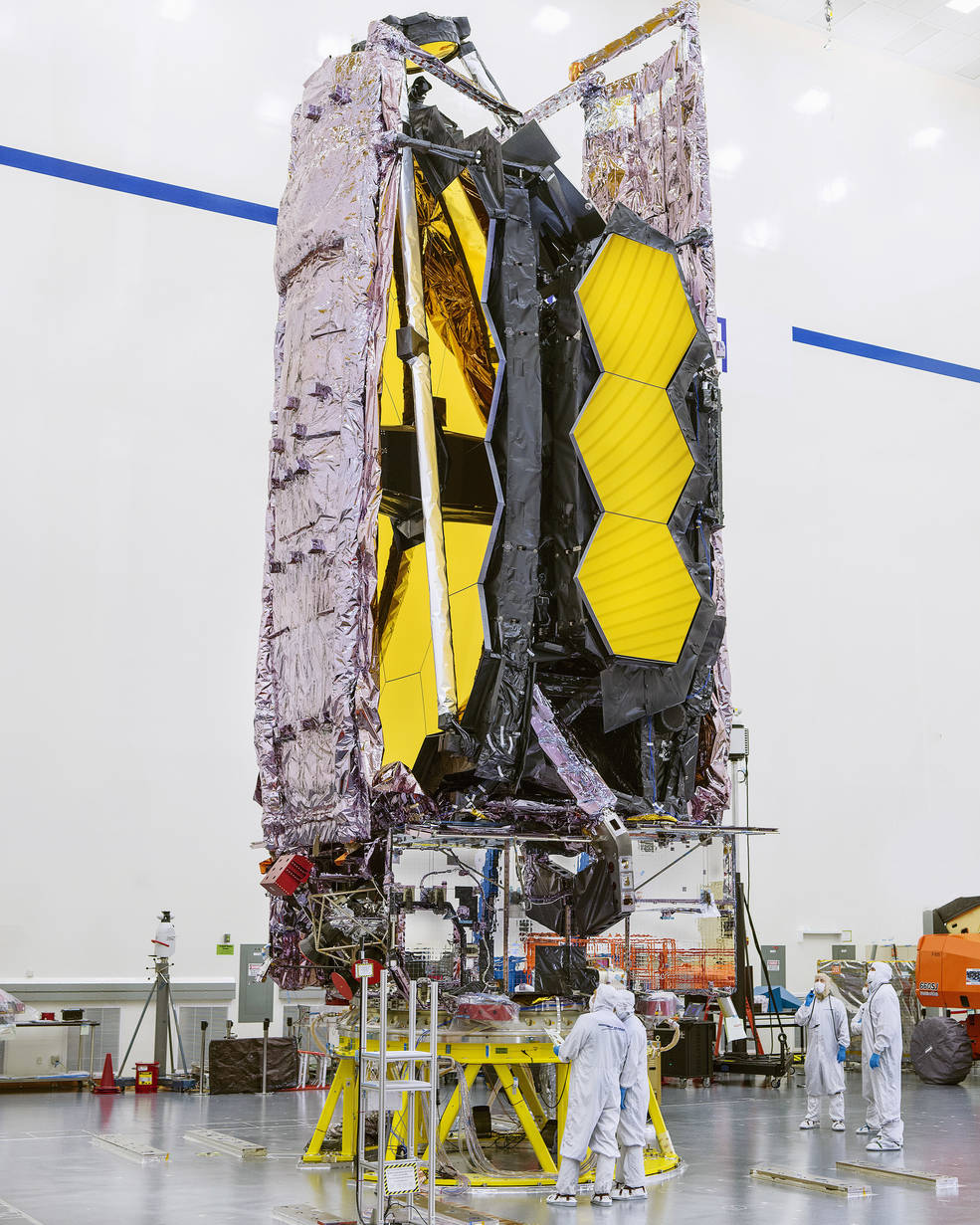 The JWST will have better-infrared resolution and sensitivity than Hubble, allowing for a wide range of astronomical and cosmological inquiries, including detecting some of the universe’s most distant events and objects, such as the birth of the earliest galaxies.

The Optical Telescope Element, the JWST’s primary mirror, is made up of 18 hexagonal mirror segments made of gold-plated beryllium that combine to form a 6.5 m (21 ft) diameter mirror, much larger than Hubble’s 2.4 m (7 ft 10 in) mirror. Unlike the Hubble telescope, which observes in the near ultraviolet, visible, and near-infrared (0.1 to 1 m) spectra, the JWST will observe in a lower frequency range, from long-wavelength visible light to mid-infrared (0.6 to 28.3 m), allowing it to observe high redshift objects that Hubble is too old and distant to observe.

The project began in 1996 with an anticipated launch date of 2007 and a $500 million budget, but it has seen repeated delays and cost overruns, and it was redesigned in 2005. The JWST’s construction was finished in late 2016, and the testing phase began shortly after. The launch was postponed again in March 2018 because the telescope’s sunshield ripped during a rehearsal deployment.

At Northrop Grumman’s facilities, engineering teams have concluded Webb’s extensive testing program. Webb’s numerous tests and checkpoints were created to verify that the world’s most complicated space research observatory would function as intended once launched into space.

Shipment operations have begun now that observatory testing is complete. This comprises all of the measures required to ensure Webb’s safe passage through the Panama Canal to its launch destination in Kourou, French Guiana, on South America’s northeastern coast. Webb’s cleanroom technicians have turned their focus from establishing it can withstand the extreme conditions of launch and work in orbit to ensuring it can reach the launch pad safely now that no more large-scale testing is necessary.

“NASA’s James Webb Space Telescope has reached a major turning point on its path toward launch with the completion of final observatory integration and testing,” said Gregory L. Robinson, Webb’s program director at NASA Headquarters in Washington. “We have a tremendously dedicated workforce who brought us to the finish line, and we are very excited to see that Webb is ready for launch and will soon be on that science journey.”

Teams at Webb’s Mission Activities Center (MOC) at the Space Telescope Science Institute (STScI) in Baltimore will continue to inspect and recheck the sophisticated communications network it will use in space while shipment operations are underway. This network recently demonstrated that it is capable of sending commands to the spaceship in a seamless manner. Within the MOC, live launch rehearsals are taking place with the express objective of preparing for launch day and beyond. There is still a lot of work to be done before launch, but with integration and testing completed, NASA’s next huge leap into the unknown will be beginning soon.

Launch processing teams will prepare the observatory for flight once Webb arrives in French Guiana. This includes performing post-shipment inspections to ensure the observatory was not damaged during transportation, carefully loading the spacecraft’s propellant tanks with the hydrazine fuel and nitrogen tetroxide oxidizer it will need to power its rocket thrusters to maintain its orbit, and removing ‘remove before flight’ red-tag items like protective covers that keep important components safe during assembly.

The James Webb Space Telescope is an incredible triumph of human creativity, made all the more astonishing by the challenges Webb employees faced in delivering this incredible space science observatory. Earthquakes, a terrible hurricane, snowstorms, blizzards, wildfires, and a global pandemic were just a few of the challenges faced by the Webb team. Webb’s narrative is one of endurance – a quest that enlisted the help of tens of thousands of scientists, engineers, and other professionals from 14 nations and 29 states across nine time zones.

“To me, launching Webb will be a significant life event – I’ll be elated of course when this is successful, but it will also be a time of deep personal introspection. Twenty years of my life will all come down to that moment,” said Mark Voyton, Webb observatory integration and test manager at NASA’s Goddard Space Flight Center in Greenbelt, Maryland. “We’ve come a long way and worked through so much together to prepare our observatory for flight. The telescope’s journey is only just beginning, but for those of us on the ground who built it, our time will soon come to an end, and we will have our opportunity to rest, knowing we put everything on the line to make sure our observatory works. The bonds we formed with each other along the way will last far into the future.”

Following the launch, Webb will go through a six-month commissioning period. The spacecraft will detach from the rocket shortly after completing a 26-minute flight aboard the Ariane 5 launch vehicle, and its solar array will deploy automatically. Following that, all further deployments will be initiated from ground control at STScI during the next three weeks.

Webb will take a month to travel over one million miles from Earth to its intended orbital destination, slowly unfolding as it goes. Sunshield deployments will begin a few days after launch, and each phase can be expertly controlled from the ground, allowing Webb’s launch complete control over deployment concerns.

When the sunshield is fully deployed, the telescope and instruments will be in the shadow and begin to cool. The mission crew will actively monitor the observatory’s cooldown in the next weeks, regulating it with heaters to reduce stress on equipment and infrastructure. Meanwhile, the secondary mirror tripod will unfold, the primary mirror will unfold, Webb’s instruments will gradually power up, and thruster firings will place the observatory in a predetermined orbit.

Several months of alignments to the observatory’s optics and calibrations of its scientific instruments will take place once it has cooled down and stabilised at its cold working temperature. Approximately six months following launch, scientific operations are planned to begin.

Webb and other ‘flagship’ missions are generational initiatives. Webb was built on the history and learning of previous missions like the Hubble and Spitzer space telescopes, and it will serve as the platform for future major astronomical space observatories.

“After completing the final steps of the James Webb Space Telescope’s testing regimen, I can’t help but see the reflections of the thousands of individuals who have dedicated so much of their lives to Webb, every time I look at that beautiful gold mirror,” said Bill Ochs, Webb project manager for NASA Goddard.

When it launches in 2021, the James Webb Space Telescope will be the world’s foremost space science observatory. Webb will look beyond our solar system to distant worlds orbiting other stars, as well as the mystery architecture and origins of our universe and our place in it.