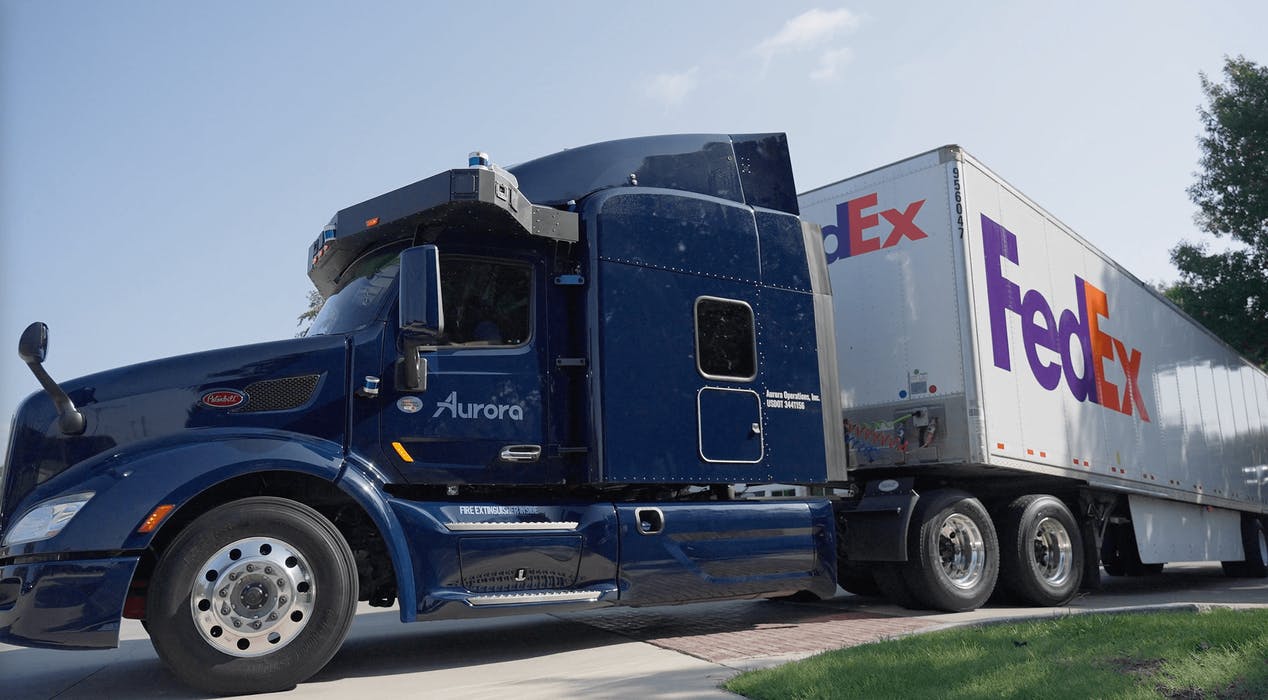 FedEx and Aurora to test commercial autonomous trucks Dallas and Houston. FedEx and Aurora Innovation are teaming up on a commercial pilot program in Texas. Aurora had partnered with PACCAR six months ago. On Sep 22, 2021, Aurora in a blog post announced they are teaming up with Fedex one of the largest transportation and logistics company in the world. Aurora will combine their trucking, autonomous vehicle, and logistics capabilities to increase the safety and efficiency of commercial linehaul transportation operations.

Aurora was founded in 2017 by self-driving industry specialists with the goal of delivering the benefits of self-driving technology in a safe, timely, and widespread manner. The Aurora Driver, a platform that brings together software, hardware, and data services to autonomously run passenger vehicles, light commercial vehicles, and heavy-duty trucks, is being developed by the firm to convey both people and commodities.

With PACCAR’s Autonomous Vehicle Platform (AVP), we’re creating a deeply integrated self-driving truck with a manufacturer that delivers hundreds of thousands of Class 8 trucks a year. And now, through this pilot, we’re extending that partnership to a key customer, FedEx, to integrate those trucks into its massive network, which delivers billions of packages each year, the company said in a blog post.

The PACCAR trucks with Aurora’s self-driving tech will be transporting FedEx goods with a safety driver between Dallas and Houston on a 500-mile round trip along the I-45 corridor on a regular and autonomous basis. Aurora will begin trucking operations at the end of 2023, transporting goods autonomously between terminals without the use of a safety driver. Building a more deeply integrated service with the Aurora Driver for fleets will be safer and faster if they develop their trucking service and Driver-as-a-Service business model alongside a trusted network like FedEx that understands how to safely maximize logistics through efficiency and speed.

“FedEx was built on innovation, and we always anticipate what’s next to be future-ready,” said Rebecca Yeung, VP, Advanced Technology and Innovation, FedEx Corporation. “This is an exciting, industry-first collaboration that will work toward enhancing the logistics industry through safer, more efficient transportation of goods and we are pleased to collaborate with other industry leaders – Aurora and PACCAR – on this endeavor.”

“The speed and quality of progress we’re making with Aurora to develop self-driving trucks is impressive. This industry collaboration is an important step toward delivering these trucks at scale,” said John Rich, CTO of PACCAR.

“The foundation for commercializing self-driving trucks at scale lies in partnership with industry leaders,” said Sterling Anderson, CPO and co-founder at Aurora. “PACCAR and FedEx are two of those leaders and we’re proud to be working with them to deliver on this important mission.”

Earlier this year Aurora signed a final merger agreement with Reinvent Technology Partners Y (“Reinvent”) (NASDAQ: RTPY), a special purpose acquisition company with a sponsor team that invests in “venture capital at scale.” The combined business will be known as Aurora Innovation, Inc. and will be publicly traded, with its common stock likely to be listed on Nasdaq under the ticker symbol AUR after the proposed transaction is completed.

The Aurora Driver is being developed as an L4 autonomous driver system that’s designed to power multiple vehicle types, from passenger sedans to Class 8 trucks, to move safely and efficiently through the world without a human driver. Aurora’s industry-defining technology was developed to accelerate progress toward the wide-scale deployment of the Aurora Driver. Aurora’s technology investments across the self-driving stack are extensive and include, for example, its holistically designed and deeply integrated hardware and software, including its long-range, multi-modal sensing suite with FirstLight Lidar. Other examples include its robust Virtual Testing Suite, next-generation approaches to perception and decision-making, and its HD mapping system, the Aurora Atlas.