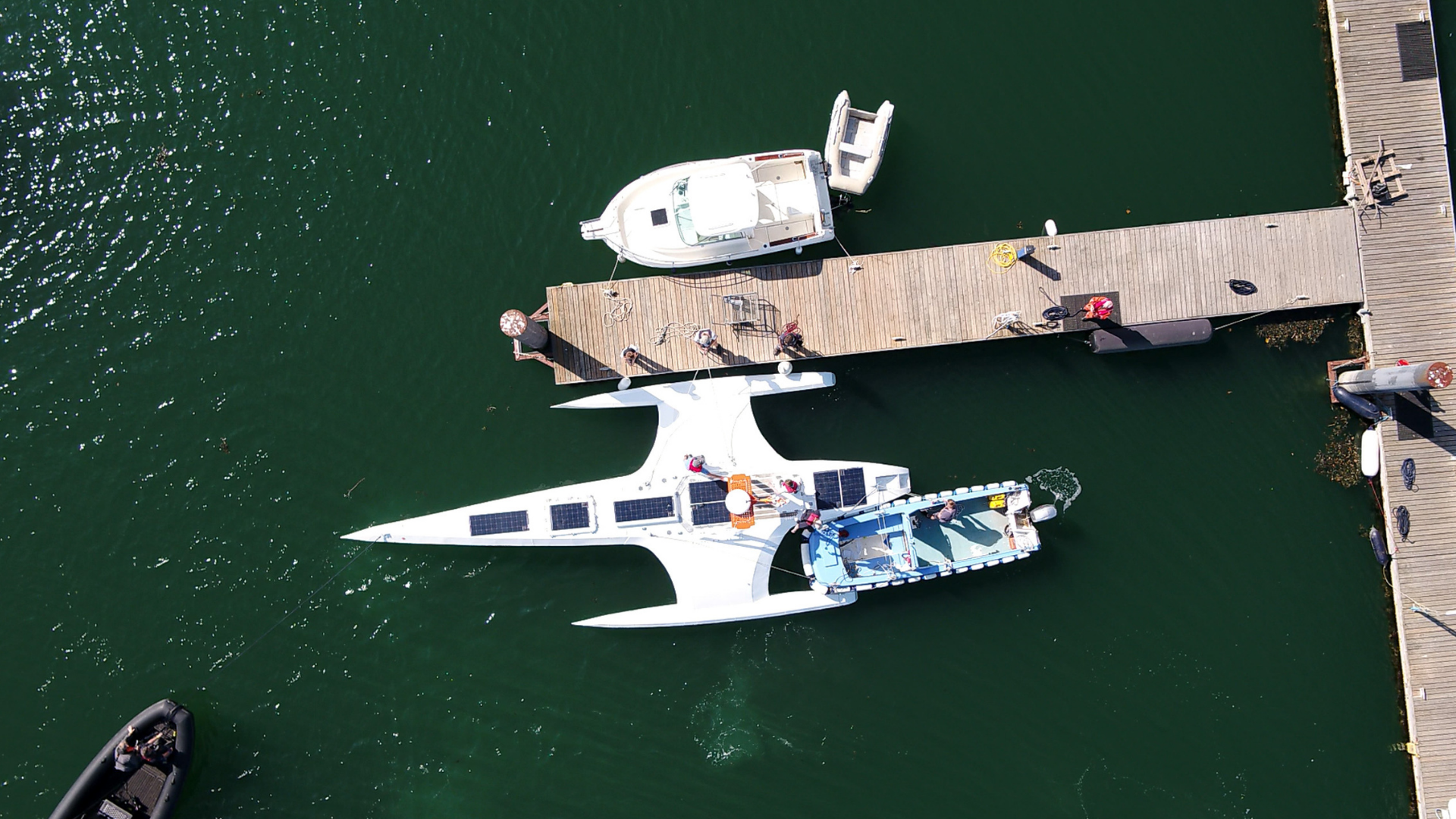 IBM is providing the AI, cloud, and edge computing technologies that will enable MAS to traverse the Atlantic in 2021, with no captain or crew. The ship’s future is working in tandem with human oceanographers and other autonomous vessels, collecting critical environmental data that will help safeguard the future of the ocean. It also paves the way for safer and more sustainable transportation models and supply chains.

Different types of autonomous cargo ship projects were in development; such as, MV Yara Birkeland whose trials started in 2019 and operations in 2020. ProMare developed an Unmanned Surface Vehicle (USVs) called with different names as Autonomous Surface Vehicles (ASVs) and Colloquially drone ships (CDSs). These ships were to be operated autonomously on the surface of the water without any human interaction.

IBM’s Mayflower Autonomous Ship (MAS) was launched on September 15, 2020. Mayflower is developed by ProMare in collaboration with IBM.

There is 70 to 71 percent of water present in the world and there are a lot of things to explore yet. This ship was made for collecting data, exploring the marine life on the ocean. Not just this there is a lot that can be done by these autonomous ships such as collecting the garbage, taking samples of the plastics present on the ocean, and much more research. A maritime research organization team at ProMare collaborated with IBM and developed an artificial intelligence-based ship. The ship is directed by a Robot and the robot is also artificial intelligence-based. This AI robot has been trained by millions of marine life nautical images to make the robot smarter while being underwater. And these images are taken from different open source databases as well as with cameras. The ship has completed over six months of seawater trials from Plymouth. Mayflower is a lightweight and trimaran ship that is made up of aluminum composite. The batteries of the ship are solar powered so that it can spend a long time on the sea for collecting data that is precious and it doesn’t need to come back to its terminal. With these features scientists, engineers and shipbuilders will get their research progress faster and can monitor the ship remotely. And they will be able to work longer in any situation.

After two years of designing, ProMare and IBM optimized the ship very compactly. It is half of its original length that was created. Design optimized up to 3% from its original, but there was not any major change in its speed, it’s just 18.5 km/hour or you can say 10 knots.

According to IBM and ProMare, the ship can scan the sea at a decent range detecting possible hazards. If it finds any unwanted activities then it can decide on its own to change its path or course which will be based on the real-time data collected from the ocean and will inform the nearby manned ships if found. This will help scientists take a smarter decision than the robot if the unwanted activity is unknown to the robot. Scientists could also gather more information about the ocean as well as the autonomous ship.

“Able to scan the horizon for possible hazards, make informed decisions and change its course based on a fusion of live data, the Mayflower Autonomous Ship has more in common with a modern bank than its 17th-century namesake,” said Andy Stanford-Clark, Chief Technology Officer, IBM UK & Ireland. “With its ability to keep running in the face of the most challenging conditions, this small ship is a microcosm for every aspiring 21st-century business.”

A seven-armed, stowaway octopus chatbot called Artie, who claims to be hitching a ride on the ship. Powered by IBM Watson Assistant technology and created in partnership with European start-up Chatbotbay, Artie has been trained to provide information about MAS and its adventures in a lively, and accessible format.

How the Mayflower works

So basically how does the IBMs Mayflower autonomous ship work? If you don’t know how many live species are present on the ocean of the whole world; then you will be shocked to know that it is more than the half of total lives present on the entire earth. And for protecting these underwater species they need to gather information about them. And for this purpose, the autonomous mayflower ship is developed to collect precious data about the ocean. The technology used in autonomous cars almost similar to technology is also used in the Mayflower. It can detect different types of obstacles or multiple hazards coming on its way from miles ahead. These technologies also known as Radar and Lidar are mostly used in autonomous cars. It has a GPS location tracker for specifying the direction and speed of the ship. For better sailing, it comes with onboard positioning cameras. A special feature that can keep track of the speed, weight, and much more stuff is the Automatic identification system.

Roaming continuously on the surface of the ocean could be a challenging task because every time the status of the ocean keeps on changing. So to tackle this situation the ship is packed with an armor system which includes altitude sensors to locate local sea state; for managing batteries and power consumption a vehicle management system is installed below the ship, and for measuring the water depths and water pressure scale a fathometer (a type of echo sounder) is installed inside the ship. This autonomous ship got special training for the deep understanding of the underwater critical issues such as marine life conservations, global warming, plastic pollution, and many more with the help of the workings of other autonomous vessels and oceanographers.

The ship has been trained with millions of marine live images. These images are processed with machine learning. And machine learning utilizes IBM’s Power AC922 for the processing operation. The IBM Power AC922 is much more powerful than a normal computer which has a powerful CPU and GPU. CPU is IBM’s Power9 and the GPU is NVIDIA V100 Tensor Core. Computer vision technology is also used to determine object nature without any consequences.

The autonomous ship uses IBM’s edge computing system for faster connectivity and also consumes less bandwidth. It is powered by NVIDIA Jetson AGX Xavier devices. The Jetson AGX Xavier module makes AI-powered autonomous machines possible, running in as little as 10W and delivering up to 32 TOPs. As part of the world’s leading AI computing platform, it benefits from NVIDIA’s rich set of AI tools and workflows, enabling developers to quickly train and deploy neural networks. It reduces the latency in the amount of data flow on the ship and helps in taking faster decisions. The ship also includes a series of research pods (temperature sensors, air samplers, etc) that provides high definition images of the ocean.

To enable followers around the world to stay updated with MAS IBM and ProMare have launched a new interactive web portal.

Built by IBM iX, the business design arm of IBM Services, the MAS400 portal is designed to provide real-time updates about the ship’s location, environmental conditions, and data from its various research projects. Live weather data will be streamed from The Weather Company, as MAS is receiving forecast data and insight from the new IBM Weather Operations Center.