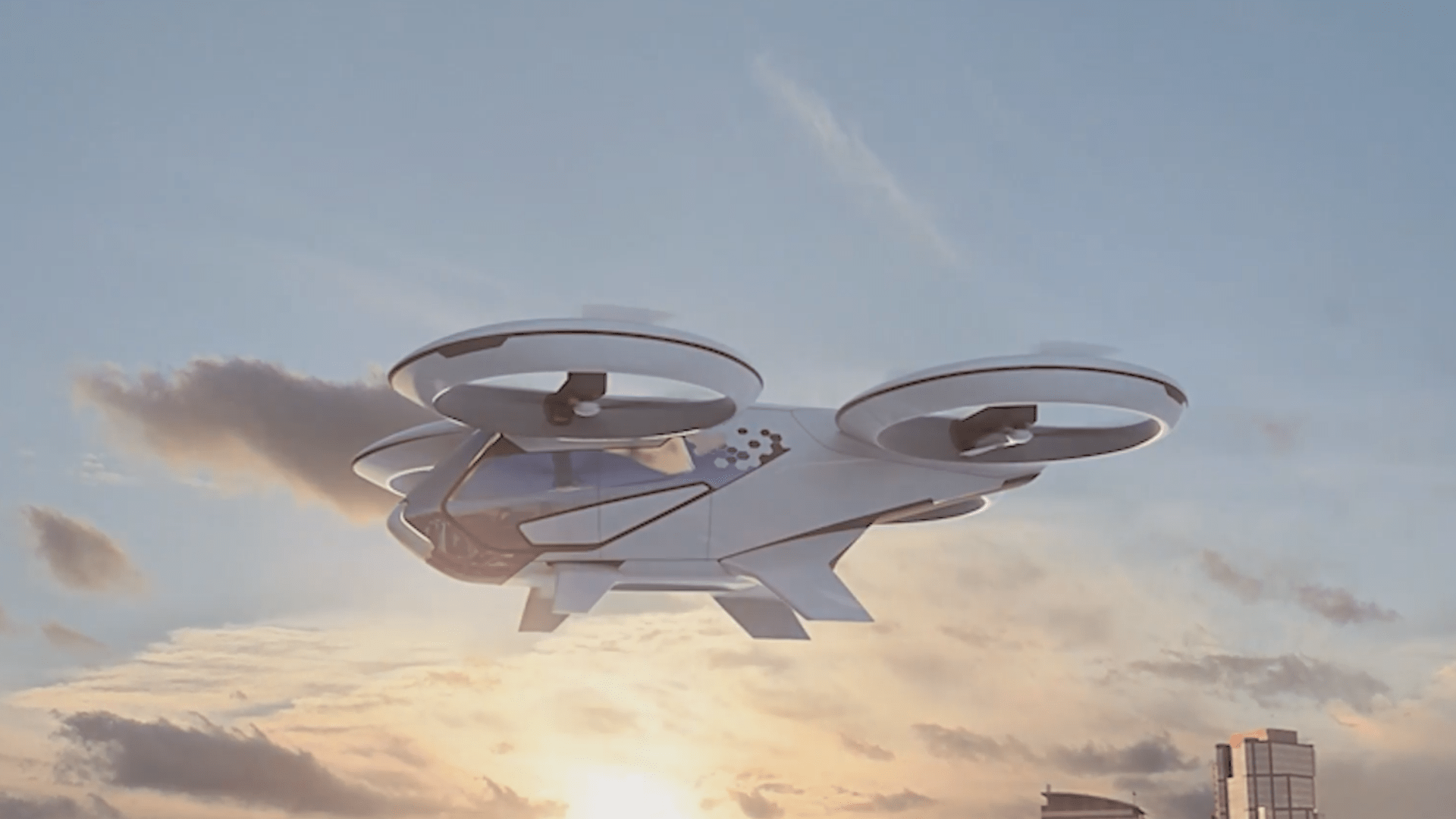 Rolls Royce developing electric propulsion system for eVTOL Air Taxis. Urban Air Mobility is a transportation system for towns or cities through which people can move in the air. Urban air mobility transportation systems developed in response to longer trip times, slower speeds, and increased vehicular queuing, which results in traffic congestion. Urban air mobility can be operated in both directions unmanned and manned.

An airline taxi is a small commercial aircraft that makes short flights on demand. In 2001, air taxi operations were spurred in the United States by a study by NASA and the aerospace industry on the potential Small Aircraft Transport System (SATS) and the rise of class jets. Since 2016, airline taxis have made a comeback as part of a growing sector of private aviation, such as passenger drones.

Rolls Royce developing an electric propulsion system for eVTOL Air Taxis. Rolls-Royce, in collaboration with Airbus, has developed a propulsion system for the City Airbus demonstrator. The all-electric multicopter is designed to carry up to four passengers at speeds up to 75 mph. For acoustic control, the eight propellers spin at a low speed of only about 950 rpm. This requires the eight electric motors that power the City Airbus to provide a very high level of torque. To solve this challenge, the Rolls-Royce Electric team in Germany has developed 200 new electric motors, RRP200D with 200kW output, and an extraordinary torque-to-weight ratio of about 30 Nm per kilogram. They have also developed the corresponding inverter and power distribution technology. CityAirbus made its first unrestrained flight in December 2019 and is currently undergoing a larger test campaign.

Technologies that support the eVTOL concept being proposed across industries spans everything from hybrid electrical systems that use gas turbines to generate electricity. In the years to come, they promise that all-electric platforms will be perfectly suited for medium to short distances, making it a great addition to the integrated urban transport network.

For long distances, the hybrid electric concept can provide the range you need while still there is to make electric and hybrid electric air taxis a reality, the industry is working to develop a wide range of charging infrastructure that can be powered through clean energy sources, departure and landing facilities. You need it all to ensure success.

Vertical electric and landing aircraft (eVTOL) and a new commercial airline (UAM) model designed to support have the potential to make many people very happy. Passengers will benefit from other ways to disrupt the gridlock rather than being caught. Investors expect to be rewarded for their faith in the first pilot of new products. And those with growing concern about the impact of aviation on the environment see the aviation revolution as a good opportunity for the industry to achieve greater sustainability.

“The flights of the CityAirbus air taxi demonstrate the capability to develop hardware for the greater Urban Air Mobility environment. Rolls-Royce will pioneer this novel way of transportation concept and drive the propulsion industries towards the future.”

The race to develop potentially transit air transport across the city skyline is on and Rolls-Royce intends to be part of it. Gabriele Teofili, Business Area Leader for Mobility Urban Air (UAM) at Rolls-Royce, provides an update on the efforts they are taking to lead the way in powering air taxis.

Urban Air Mobility is a completely new market and many companies are looking to develop eVTOL (electric vertical towing and landing vehicle) concepts into products. These vehicles, which serve a variety of needs from individual passenger transportation for cargo and medical purposes, will rely on electric or hybrid-electric power and propulsion systems.

Innovative electrical technology is a key ambition as Rolls-Royce builds on its present expertise. They have established a specialist team focused on the further development of clean, efficient, and quieter technology for aviation, land and sea transportation, clean power, and industrial applications. This goal is in line with their mission to innovate sustainable power and contribute to a zero net carbon future by 2050.

You are leading the Rolls-Royce Urban Air Mobility program. What goals do you set?

Co-ordinates the operations of Rolls-Royce globally, to understand this burgeoning market and to guide technological development to ensure they are delivering the complete dynamics system that will power this new mode of transport.

Are you confident that the UAM market will be successful?

This vibrant market has huge potential for Rolls-Royce over the next decade. Before COVID-19, startups Urban Air Mobility put together a close to $ 1 billion investment, showing a huge interest in entering this market. There are many challenges including infrastructure, electricity supply, and social acceptance, but by close cooperation between different industry actors, infrastructure providers, and government, there will be an opportunity to help make this future a reality.

What are the next steps for travelers flying on eVTOLs?

Today they are seeing pilot trials in cities like Singapore and Guangzhou and later they expect them to be able to operate independently. They believe that the first markets will develop on fixed to fixed routes points in megacities, already partially serviced by helicopters. However, the benefit of the eVTOL is that they have the potential to be much quieter and to cover these distances at a fraction of the cost. Other applications could follow in agricultural, cargo, and rescue missions, with commercial use in the 2020s, with large numbers of passengers being transported a decade later.

How did the CityAirbus demonstrator flight test campaign help you develop your technology?

This is an important project for the team and Rolls-Royce, collecting flight data for eight electric propulsion units and their distribution systems. This data allowed them to constantly upgrade and fine-tune installed software and hardware. This also allowed the team to learn how the system works in flight and discover the full functionality of the prototype. Flight demonstrator (or flight testbed) is an important learning tool for preparing next-generation power systems.

It’s a great opportunity to be at the forefront of developing technologies that will enable these new vehicles. Focus on three key areas, first, testing of their model aircraft – their power program that provides CityAirbus monitor forward on the road to the product. Their propulsion system design finally, is a component of the parts. They take the individual technologies through the degree process step by step to finally reach a proven, air-appropriate system.

Besides, they continue to build on their partner network and attract customers, so they can work together to live ideas for their urban air travel in this way, they can ensure that their designed system is tailored to the real needs of the market.

Will you be working on developing a propulsion system for the urban aeronautical mobility market with technology being developed for other markets?

Rolls Royce developing an electric propulsion system for eVTOL Air Taxis. Rolls-Royce plans to provide power and propulsion products to other emerging aviation markets. They can already see small electric propellers. Aircraft such as training planes are in flight and are certifying the first products for this application. They also offer customers the opportunity to retrofit their planes and up to 19 seats equipped with new designs of commuter planes under development looking for an opportunity to do it. Finally, their traditional sector aircraft will be more electrically powered through integrated electric starting generators, auxiliary power units, and more intelligent management of the in-flight electrical system. The power and thrust of the Air Taxi will complement this portfolio.

Individual and very specific technical requirements, but the wide range of features required is the same. Rolls-Royce builds vast expertise in electromechanical development across a very wide power range from tens of kW (such as H3PS generators) to several MWs (for marine customers), but in addition to power electronics experts, energy storage systems, and condition monitoring. They have an excellent system that allows you to integrate all components and subsystems into a lightweight and efficient overall system, and they are focused on bringing this technology to their products in all markets.

Have you already minded what the next-generation power system for UAM will look like?

Their electromechanical key design elements are highly interactive, so they are constantly developing and testing their technology as their potential designs mature. This will soon wrap up their design down to the best candidate. And they can tell you this much that they will solve this challenge by applying innovative electromagnetic design, new lightweight insulation, and clever cooling system suitable for operation in physically demanding environments.