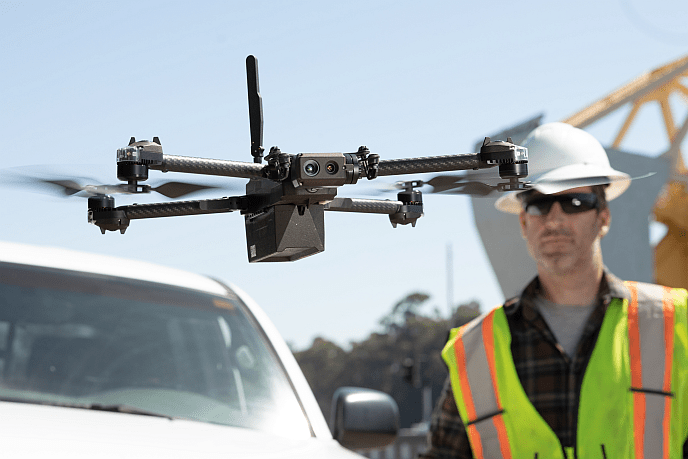 Skydio 2 most advanced self flying autonomous drone. We all know about drones right? It is a type of tiny aircraft without a pilot. Drones are known as Unmanned Aerial Vehicle (UAV). Components of UAVs are, a ground-based controller and a communication system through the controller and the drone follows the commands released by the controller. Drones make our lives much easier than before such as they can travel places that are hard to reach for us, it can help in agriculture, it can monitor traffic activities, or can deliver pizza in time, etc.

The first modern drone was developed in the year 1935. And it was developed for aerial target practice; from there UAV’s culture had started. And now is 2020 where the drones got more advanced than before. So a most advanced drone was released in the year 2019, 1st October Tuesday, and got sold out on 2nd October.

Skydio 2 is one of the most impressive drones you have ever seen. We all know we can make many uses of drones but we need open and clear surroundings so that we can operate them without hitting any obstacles. Or you might be wondered about a drone that can fly in any unstructured environment, which means a fully autonomous UAV; and obviously, that would be expensive. And Skydio 2 would do the job for you. This new expensive UAV will help you to reach your dreams with drones. Skydio 2 is a fully autonomous mini aircraft that can fly stress-free in areas where other drones can’t fly. Almost in any type of environment Skydio, 2 can fly. In challenging areas, it will run so smoothly that you can’t believe it. The AI technology of Skydio 2 prevents it to hit any obstacles so you can operate it stress-free. Drones are used for shooting videos. So with Skydio 2, you can capture videos in such a way that you will find yourself a professional drone pilot or sometimes better than a professional pilot. You will wonder that it is some kind of magic or what.

Skydio has been named to Fast Company’s prestigious annual list of the World’s Most Innovative Companies for 2021. Skydio’s drones are designed to relieve the pilot of the responsibility of safe flight. As part of the Autonomy engine, their drones have six navigation cameras for 360° awareness and a GPU that runs nine deep neural networks. This combination enables the drones to perceive and understand their surroundings, plan a path through them, and avoid impediments, allowing the operator to complete the task faster and more safely. The Qualcomm® QCS605 SoC (system-on-chip), Qualcomm® QCA6174A SoC, and Qualcomm APQ8009 application processor power the drones’ superior picture capture technology.

The Skydio 2 drone is well designed and the look and feel are very solid. It doesn’t make of plastic as other does, it is made up of magnesium. So it is a bit heavier and rigid and more durable than plastic. It comes in a black and blue color combination which looks attractive. It is consists of six hemispherical cameras for obstacle avoidance and these cameras are connected through the NVIDIA Jetson TX2 computing module. And the components (motors, battery, props, and gimbal) are placed in order to the cameras so that components could be monitored by the cameras for obstacle avoidance. The battery is mounted at the bottom; if you remove the battery the drone looks quite flat. It has a satisfying magnetic latching system for the battery.

One offset props are placed above the body that is the back pair and the front pair is below the body. And it is necessary to be in the range view of the cameras for obstacle avoidance. And the hemispherical cameras are placed at different angles like, at the end of each arm, above the body of the drone, and also on the below body of the drone. So you need to keep these cameras always clean and for this purpose, you will get a cloth from Skydio. And the cameras are quite exposed but it has a small ground protection fin. It has two microSD slots, one is for recording purposes and the other is for storing drone data.

Skydio’s products are being used for anything from shooting incredible videos for customers to checking infrastructure, bridges, and residential properties for engineering firms to providing situational awareness for first responders in critical situations. These items have been widely regarded as the world’s most advanced and capable autonomous drones.

Skydio presently has two drones available. Their Skydio 2 drone is a small quadcopter with an Autonomy engine and a compact, lightweight airframe that makes it intelligent, safe, and simple to fly.

Operators can control the Skydio 2 drone with one of two devices (as indicated in the images below):

The Skydio X2 (picture below; pre-order now) is a mid-sized drone that combines autonomy with a ruggedized airframe comprised of magnesium and carbon fiber composites, as well as foldable arms for convenient pack-and-go transportation. The Skydio X2 also has a 12MP color camera and FLIR thermal sensors with a resolution of 320×256. For ground control, the Skydio X2 works in tandem with the Skydio Enterprise Controller. The Enterprise Controller contains ground control software via the Skydio Enterprise App and was built from the ground up for pilots with strict operating needs.

Advanced AI features from Skydio can be built on top of the drone to solve specific use cases. The Skydio Autonomy Enterprise Foundation is a set of AI-piloting tools designed to improve situational awareness and flight control in difficult situations. Skydio 3D Scan, on the other hand, is autonomous scanning software that fully automates the photogrammetry capture process required for 3D models.

Use Cases for Skydio 2 most advanced self flying autonomous drone

Even the most experienced pilots would not attempt flight maneuvers with other drones. Users can concentrate on what they are doing, whether it is riding a mountain bike, shredding snow, or framing the ideal sunset image, while the drone takes care of the flight.

When compared to manual drones, an inspection of critical infrastructure with autonomous drones can help reduce the need for expensive equipment or worker exposure while dramatically enhancing data collecting efficiency.

On emergency response, search and rescue, or firefighting missions, public safety workers might receive tactical situational awareness. They can focus on the mission and increase the safety of first responders by deploying autonomous flight skills.

Organic Intelligence, Surveillance, and Reconnaissance (ISR) tasks can be carried out by defensive units while decreasing the cognitive burden on the operators. Pilots can concentrate on the mission rather than flying the drone thanks to AI-pilot support. Skydio can guarantee the highest standards of supply chain and manufacturing security by buying their core processors from US firms like QTI (e.g., their defense and enterprise products comply with the US Department of Defense’s strict supply chain requirements).

QTI and Skydio collaborated extensively to build essential architectural functions. Skydio employed the Qualcomm® QCS605 SoC (Vision Intelligence Platform) and the Sony IMX577 sensor for the primary camera system. With numerous concurrent high-bitrate compressed streams, low-latency preview, and low-resolution uncompressed streams, this system can deliver 4K video at up to 60 frames per second with HDR for best-in-class image quality. Image quality was achieved by working closely with QTI and Skydio to build sophisticated features and iteratively improve quality with our image processors throughout the development cycle. The QCA6174A SoC is also installed in the drones to enable Wi-Fi connectivity with the Controller and Beacon.